Home  /  Highlights, Videos  /  The Week That it Was for Brexit

The Week That it Was for Brexit 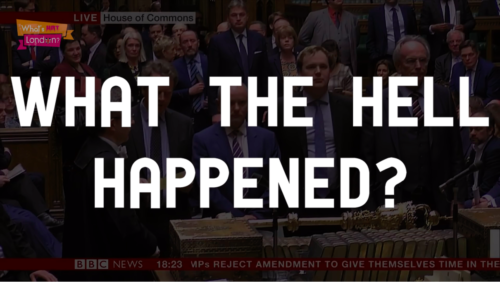 What on earth happened with Brexit this week? If you’re asking yourself that question then fear not. Not only do we have the lowdown on all this week’s events but an update on whats coming next in the Brexit process.

The Last Week In Brexit:

Monday 11th of March: Theresa May secures legally binding changes to ‘the backstop’ which she hopes will convince brexiteers and the DUP to vote for her deal.

Wednesday 13th of March: The Government loses again as Parliament votes to block no-deal happening at any time. Although this is not legally binding, it is morally binding for the prime minister and makes no-deal extremely unlikely.

Thursday 14th of March: Parliament votes overwhelmingly to delay Brexit and ensure the Prime Minister gets an extension. The EU27 countries must unanimously back this extension, which they will, most likely, do simply to avoid a no-deal scenario.

This leaves Britain with two options: a short delay or a long delay.

Option one: Next week Theresa May will bring her deal before parliament for the third time. Although nothing has changed within the deal itself, she hopes that brexiteers and the DUP will back it as they’re preferred options of a harder Brexit seem unlikely. If the deal does pass then the PM will receive a short extension to get the paperwork done and we will leave the EU on June 30th.

Option two: If Theresa May’s deal fails again then parliament will hold a series of indicative votes. This essentially consists of spending two weeks voting on lots of ideas until parliament can build a consensus around one particular plan. This will most likely be a softer Brexit which involves staying with the customs union. However, this process would take a long time to complete and could see a delay of up to a year, meaning UK nations would have to vote in the EU elections at the end of May.

Whatever happens, one thing is certain, we won’t be done talking about Brexit for a long time yet.