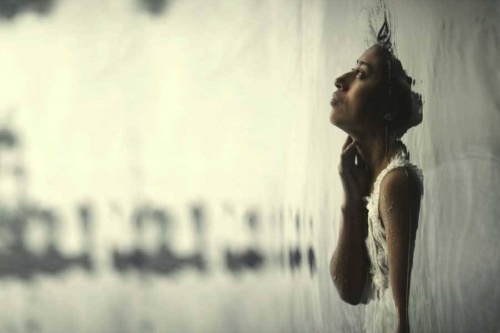 The title translates as ‘weeping woman’ which may well be a metaphor for a weeping nation in Guatemalan director Jayro Bustamante’s haunting political drama which captures the trial of an ageing General Enrique Monteverde (Julio Diaz) accused of genocide. There are parallels with Guatemalan dictator José Efraín Rios Montt, who went from general to absolute ruler after a 1982 cout-d’etat. His scorched earth military campaign against the indigenous Mayan indians was regarded as an attempt to reduce their numbers and rob them of their oil-rich lands and this scenario is played out again in La Llorona but with a supernatural element.

The visual language is at once melancholically minimalist and yet again fantastical and dreamlike. Long takes on the characters are there to box them in for confessionals which are patiently drawn out from a military family too afraid to face uncomfortable truths. Actually, there’s a boxed in atmosphere throughout the film with the general’s residence besieged by protestors angry that his conviction has been overturned (which also happened to José Efraín Ríos Montt).
–
The general’s hideaway is anything but that. Despite the company of his wife Carmen (Margarita Kenéfic), daughter Natalia (Sabrina De La Hoz) granddaughter Sara (Ayla-Elea Hurtado) and head maid Valeriana (Maria Telon), he finds little respite when the crowds keep coming and the news cameras never go away. Only the sounds of the baying, chanting crowds filters through during these powerful introspective periods and the protestors keep this up through the night until his wife’s comment that “they’ll drive me crazy” is in danger of coming true as her eyes redden with conjunctivitis through the stress, giving her a half-crazed, ghostly appearance which fits the haunting atmosphere.
_
His frosty wife’s inability to accept her husband’s atrocities are not supported by her daughter who has concerns about his sexual past and his complicity in the bloodshed. Her own estranged husband has mysteriously disappeared and her father does not have the air of one entirely blameless. These concerns arise again when her mother explains away soldiers rape of Mayan women with the disturbingly icy insouciance of a blindly loyal wife who accepts him as a philanderer but not the genocidal war criminal.
_
Perhaps it’s her way of dealing with the ghosts of the past. She looks more and more like one herself as the guilt racks into her emotional state, reflected by her increasingly unkempt appearance. It brings to mind the bloody hands of Lady Macbeth but ultimately, she faces a redemptive moment. Peeing her bed in the night and wrestling with constant nightmares and visions go some way to making her see her husband in a different light. The old man with dementia never once wilts, not even when his wife slaps him and gets her hands around his throat in frustration.
_
But her redemption is hastened by the arrival of a mysterious new maid played by Maria Mercedes who takes the place of the other house servants (all Mayan indian) who have fled. It’s this eerily melancholic new house servant who holds the key to karmic justice.
More What’s Hot London? Film
Tagged with:     film festival, Guatemala, La Llorona, movie