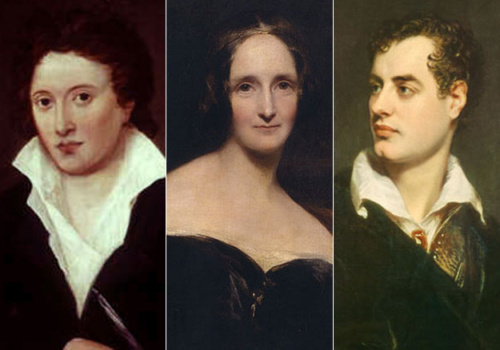 Review of: Keats House: Keats, Byron and the Shelleys (Museum)

Keats House Museum in Hampstead is devoting much of its autumn programme to the work, literary influence and friendship of poets John Keats, Lord Byron, Percy Shelley and Frankenstein novelist Mary Shelley. Keats and Shelley were quite close. On hearing of Keats’ ailing health, Shelley advised him to convalesce at Shelley’s family retreat in Italy but Keats graciously declined. At another retreat in Lake Geneva, Switzerland Byron, Shelley and his wife Mary would gather for a ghost storytelling challenge which resulted in her writing Frankenstein.

‘You speak of Lord Byron and me – There is this great difference between us. He describes what he sees – I describe what I imagine – Mine is the hardest task.’ – John Keats

The museum’s first instalment was Late Night Keats: Gothic Regency on October 27th, which examined how Gothic literature influenced Keats and the Romantic Poets. Mary Shelley’s Frankenstein may well owe a debt to Milton’s Paradise Lost; as discussed at the museum. But fast-forward to last weekend’s Afternoon Poems: ‘It’s Alive!’ – Byron, the Shelleys and Frankenstein. Again, the influence of Gothic literature was discussed with a focus on the Bryon and Shelley circle with reference to that ghost story challenge between the three of them at their Lake Geneva retreat.

The Keats House Poetry Ambassadors read a selection of poems and passages from novels that highlighted their shared fascination with death and the supernatural. Of course, there were excerpts from Frankenstein, Volume Two but also from its precursor Milton’s Paradise Lost (Book Eight). Percy Shelley’s poem Prometheus Unbound is amongst the Prometheus-themed work produced by these three literary giants, with Mary Shelley’s Frankenstein novel the ultimate creative realization of the Greek myth of Prometheus and his flight from Mount Olympus with the fire of knowledge stolen from the Gods.

A reading from a 1816 short story by Lord Byron clearly shows his interest in vampire subjects and may have inspired a spring of Gothic authors. It explains why around the period some readers confused the authorship of his work and that of John William Polidori (The Vampyre), who was obviously influenced by him. Bryon’s 1813 poem The Giaour also tells of a soul condemned to return as a vampire, yet Byron later disconnected himself from the genre and denied any such obsession with supernatural subject matter.

The third and final instalment of the Keats-Byron-Shelley relationship is Shelley: ‘The Trumpet of a Prophecy’ Guided Walk on Saturday 25 November. There’ll be visits to landmarks in the life of this intellectual, radical poet and his relationship with Frankenstein novelist Mary Shelley.