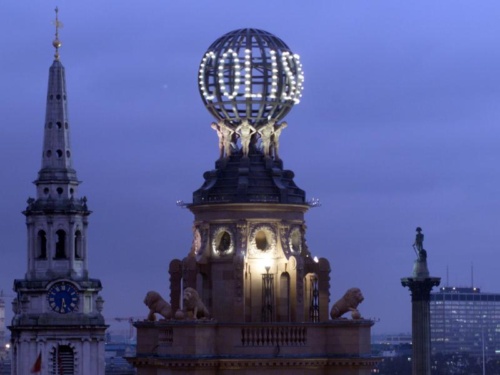 The current revival of Leos Janacek’s opera Jenufa by the English National Opera at the London Coliseum is a welcome addition to the London music scene.  It should not be missed by lovers of dramatic opera.

Janacek based the opera on the play Her Stepdaughter by the Czech feminist writer Gabriela Preissova.  His daughter Olga suffered from typhus while he was writing much of the work and died shortly before he completed it.  It seems clear that much of his love and grief for his daughter was poured into his portrayal of the title character.

The action takes place around a mill in a village in 19th century Czechoslovakia, although the production by David Alden updates the setting to a 20th century industrial town.  The mill is owned by GrandmotherBuryja.  Her grandsons are the half-brothers Laca and Steva.  Her daughter in law is the Kostelnicka, or village sacristan – a church official.  The Kostelnicka’s stepdaughter is Jenufa.

Act 1 occurs outside the mill.  Jenufa is anxiously awaiting the return of her fiancé Steva, who has been called up for interview prior to military service.  Jenufa is secretly pregnant and is terrified that military service will prevent Steva from marrying her and thus spare her from the shame of having a child out of wedlock.  Her grandmother reproaches her for neglecting her work.  Laca sulks nearby, complaining that both women ignore him and deny him any affection.

The Foreman announces that Steva has not been called up and Jenufa rejoices.  Steva enters boisterously with several villagers and recruits.  He celebrates by dancing with other girls; Jenufa complains that he is drunk again.  The Kostelnicka enters and puts a stop to the celebrations.  She recalls how her late husband was a drunk and spendthrift.  She will not allow Jenufa to marry someone in the same vein and announces that she will not permit the marriage until Steva has abstained for a year.  She declares that God will strike down Jenufa if she disobeys her.

Left alone with her fiancé, Jenufa begs him not to annoy her stepmother.  He teases her by boasting of his popularity with women but then reassures her that he will not leave her.  His grandmother enters and tells him to rest.  Laca has been sat nearby, sharpening a knife.  He attempts to speak to Jenufa but she tells him that Steva is a hundred times better than him.  He tries to embrace her but she rebuffs him; in anger, he slashes her face with the knife.  Horrified, he protests that he loves her; the Foreman declares that he did it deliberately.

Act 2 takes place in a cottage during winter.  Jenufa has given birth secretly; she and the baby are kept hidden by the Kostelnicka, who has told everyone except Laca and Steva that her daughter has gone to Prague.  The Kostelnicka complains that Steva has not visited them once and tells Jenufa that it would be best if the baby was taken by God.  She gives Jenufa a sleeping draught.

The Kostelnicka has summoned Steva.  She appeals to him to marry Jenufa and spare her from her shame.  He refuses to do so, saying that he cased to love her after seeing her face scarred by the knife and he is anyway now engaged to the mayor’s daughter Karolka.  He leaves.

Laca arrives, insisting that he loves Jenufa and is prepared to marry her.  Unlike Steva, he has visited the cottage regularly.  When the Kostelnicka tells him about the baby he is horrified; so she quickly tells him that it has died.  Laca leaves, promising to return later.  The Kostelnicka is torn between compassion for her step-daughter and grandson and her religious convictions, which tell her to avoid a scandal.  She decides the best course of action is to drown the baby and hide the body under the ice.

Jenufa awakes to find her baby gone.  She is told by the Kostelnicka that she has been asleep for two days and the baby has died.  She is crushed but in her emotional state, is persuaded to marry Laca.  A bitter wind forces the shutters to fall away from the window-frames.

Act 3 is set on Jenufa’s wedding day.  Guests arrive, including the mayor and his family, followed by Steva.  The Kostelnicka sits apart, more tense than anyone else.  Voices are raised outside; the ice has melted and the body of a baby has been found.  Jenufa exclaims that it must be hers and the crowd bursts in, demanding she be punished.  The Kostelnicka admits that it was she that was responsible for the baby’s death.  She is led away and everyone leaves, apart from Jenufa and Laca.  She tells him that her life cannot be linked with his and she will have to go away.  She has forgiven him, knowing that he acted from love, as she did.  Lacasays he will not leave her and the two embrace, looking to a brighter future together.

This was a superb performance of a powerful drama about human weakness and forgiveness, brilliantly conducted by Mark Wigglesworth.  It is difficult to single out cast members since there is no weak link.  The American soprano Laura Wilde, makes her European debut in the title role with a great performance embodying Jenufa’s vulnerability.  Peter Hoare vividly conveys Laca’s transformation from petulance in Act 1 to compassion and love in Act 3.

Jenufa is one of the greatest works of the 20th century.  Is is hot?  At the risk of sounding biased, it’s boiling.  There are further performances on 1, 6 and 8 July.  There are tickets available at all price levels and you may be able to obtain a discount at the half-price theatre booth.  Go and see it.