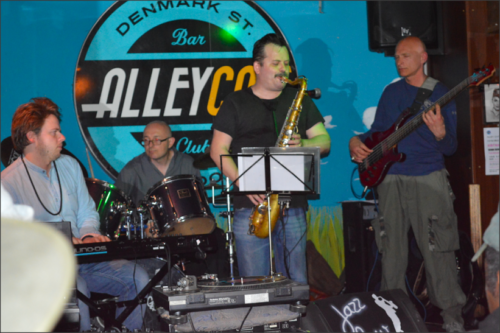 Given half a chance every wannabe musician would probably charm you with stories about how they hung around the instrument shops on Denmark Street off Charing Cross Road trying out all the latest kit and annoying the sales assistants by jamming loudly in-store like they were the next Miles Davis or Jimi Hendrix in waiting. Just a very out of tune version. Those who later go on to have some degree of success will also recount how the low-key gig joints on the same street were ‘instrumental’ (forgive the pun) in their careers. They’re probably right on both counts. Denmark Street is the place to be if you’re looking for a cool muso vibe. And you need look no further than The Alleycat Bar, a basement venue that looks so fit for purpose as a jazz venue you get the feeling it was custom built.

It’s Jazz Blow Live night runs every third Tuesday in the month and already getting a name as the place to be in West Central. Well before the first acts take the stage DJ Micronaught is warming up the fusion-faithful with jazz, latin grooves, soul and funk. Later the outstanding Steam quartet led by bassist Paolo Bassi get no introduction and need none! You are soon hooked on their virtuoso skills and musicianship which seems to delight in the ‘London-at-night’ vibe. Some members of the audience sit plucking their own guitars throughout. This is definitely a muso crowd. But no airs and graces just laid back appreciation of the type of craft it takes decades to develop. Quite literally. The quartet’s drummer Eric Ford has been playing for 30 years!

It’s a must for anyone seeking an archetypal jazz joint – it has the neon sign, the basement, the dimmed down lights. The only thing it doesn’t have is the smoky atmosphere. Smoking’s banned you see. And if watching isn’t your thing then Monday night’s open mic might inspire you to take on the jazz greats at their own game. As long as you remember that those greats have had decades of experience in that particular game and therefore first-hand understanding of Miles Davis’ wise philosophy of “it’s not the notes you play, it’s the notes you don’t play.” This nebulous, experimental yet seamless nature of jazz music is what gives it that lasting appeal while other music fads come and go.