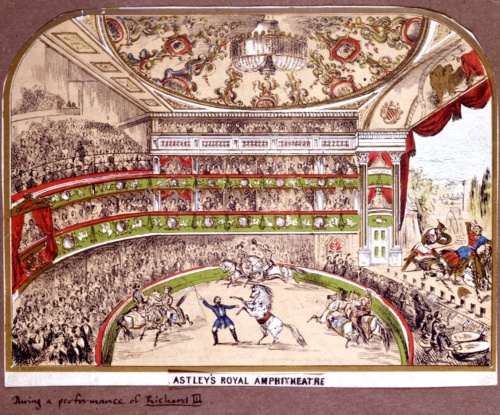 On today’s date Jan 9th back in 1770 English circus owner Philip Astley (who himself was born on Jan 8th 1742) staged the first modern circus in London. This inventor and equestrian had a colourful life which included a stint in the cavalry during which he fought in the Seven Years War (1756-63) for which he was rewarded with the rank of Sergeant Major.

By the time his military career came to an end, the popularity of court entertainment had waned considerably so horse-loving Astley had to find new audiences for his equestrian skills. In their place came commercial theatres in London which thrived beyond royalty and nobility and depended on the common purse.

After researching the success of these other theatres which often had a mix of entertainers from acrobats, actors through to jugglers and musicians he started his own Riding School in 1770 which copied this formula but introduced equestrian acts with clowns and other novel touches which set it out as the first circus of its time.

As Astley’s success increased he faced competition even from former associates. This included his former equestrian Charles Hughes who insisted on constructing his own establishment as close as possible to Astley’s. Built on land where the bridges of Westminster, Blackfriars and London Bridge all met, this Royal Circus, Equestrian and Philharmonic Academy was the first to bear the title circus but not the first de factor circus – Astley beat him here despite his struggles to get an official Royal Patent.

But Hughes would forever be a thorn in his former employer’s side, although by 1804 this badly managed rival would flirt with bankruptcy on many occasions. Astley, however, was better in this department and in 1782 expanded into France after a successful performance before Marie Antoinette in Versailles and later opened a third in Dublin.

During this tumultuous period of British history, Astley was drawn into the UK’s war against revolutionary France, returning to the British cavalry and setting himself against the same French who had so enthusiastically celebrated his work. However, he would return after the Peace of Amiens to reopen his Paris amphitheatre and maintain his indomitable presence on both sides of the English Channel.