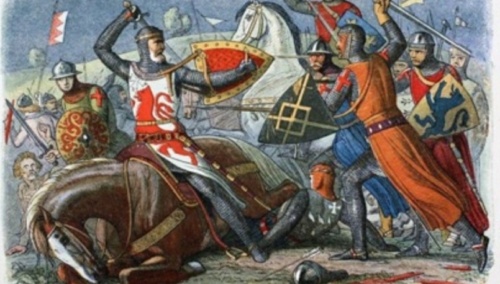 In this day and age we grumble about Brexit and Boris and take for granted many of our democratic rights but it’s important to remember that were it not for one rebel baron 750 years ago we’d probably still be ruled by a monarchy. Baron Simon de Montfort at the very least planted the seeds of state rule that later generations would follow and he did so on January 23rd 1265.

All of this sprung from civil war in England – The Second Barons War of 1264-1267 where Baron Simon de Monfort lead an uprising of barons against Henry III’s army. The noblemen had grown discontented with monarchial rule after a call for increased taxation and also famine pushing the dissent over the limit.

The relationship between the baron and the king had always been a troublesome one. Even though the French-born de Montfort was one of Henry’s foreign counsellors and had married his sister they were constantly feuding. Marrying Henry’s sister without following established etiquette by seeking permission from either the king or the English Barons was seen as the last straw. The king soon had de Montfort on trial for trumped up charges arising from the baron’s stint as lieutenant of Gascony.

De Montfort retaliated by gathering the support of a rebellious group of barons who wanted greater baronial rule. It was in 1258 that the king agreed to their Provisions of Oxford which dismantled his power and decreed that twenty four barons would become government and every three years a newly-formed parliament would review their progress. And it was so the January Parliament came into being.

Even though Henry had sworn an oath to these terms, in 1261 he sought a papal decree freeing him of this. This triggered a bitter civil war with Henry’s son Prince Edward Longshanks leading the Royalist army. However, it was de Montfort who prevailed, capturing huge swathes of south eastern England and defeating Henry at the Battle of Lewes. Both Henry and Edward were now taken prisoner.

In the aftermath, Henry was allowed to remain as a figurehead but de Montfort pressed on with his reforms, much to the chagrin of the barons who had been supporting him. They were particularly irked when he extended his government to include not just barons and nobility but common representatives from counties, major towns and boroughs. In this respect he had gone further than any reformist before him and created the first House of Commons.

However, Prince Edward escaped captivity and reared the Royalist forces again at the Battle of Evesham in 1265 where they were victorious and buried the rebellion by slaying its charismatic leader Simon de Montfort. But this fifteen month period of government and parliament had seen the monarchy all but extinguished for the first time in British history.

The Houses of Parliament visits and tours