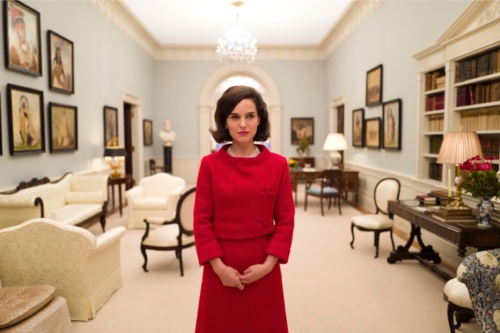 Yet another movie marking out the tragic yet golden term two year of the Kennedy presidency, but this time from the vantage point of his widow Jackie Kennedy – literally. This Pablo Larrain directed bio-pic actually includes a gruesome re-enactment of the assassination and the entire movie is about his wife relating every moment, every detail to a grave looking journalist.

Natalie Portman’s pale, gaunt introduction as the First Lady inviting this Life magazine journalist into her home sets the tone of this respectfully paced and (at first) non-intrusive opening. However, once all the nods to elegant attire and graceful set design are acknowledged its the accent that gets you. It’s a strange one – not quite upper class English and not quite American.

The reason for this, it seems, is because Jackie Kennedy is supposed to have had a mid-Atlantic accent. This was taught to upper class Americans during the 1920s – 50s at elite schools in the North East states. Eleanor Roosevelt was supposed to have had one as well. The problem is, any film clip of the real Jackie Kennedy will tell you her accent is not as pronounced as shown in the movie. You can barely compare the breathy, stilted cadence that Portman brings.

The actress’s accent, particularly in these opening scenes, is so effected you can at times feel her energy focused more on elocution than acting and so comes across as a little stiff. This becomes even more noticeable when she’s sat opposite the more natural, believable Billy Crudup who plays Theodore H. White, the Pulitzer-winning journalist interviewing her. Parallels can be drawn with Oliver Stone’s Alexander movie (2004) where the accent issue drew attention away from the bottom line – the acting. (I do believe there were some Irish accents in that Greek movie!).

Accent aside, Portman is convincing as a dignified and quietly charismatic Mother of the Nation in the wake of Kennedy’s death, in a way few rival actresses could have held centre stage. The notoriously mysterious and private First Lady opens up to the world for a few brief hours on celluloid in a way she could never do in life. Her grief comes across as muddled but perhaps a little too dry and controlled (even for a First Lady). There are also intriguing insights into the post-traumatic moments of confused idle chatter only those close to her were privy to.

Generally speaking, the production ingredients are both eye-catching and historically on point. The cinematic elegant sweeps of the White House are what we all come to expect and we are not short-changed in that department. It’s a thoughtful and moving account of the camelot years, even for those who are not usually enamoured to so-called political flicks, because this one doesn’t pretend to be a moral tale.