It Comes at Night (Film) 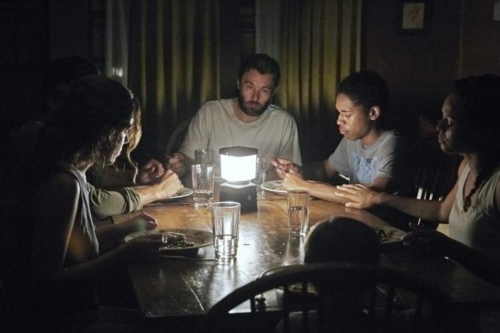 Review of: It Comes at Night (Film)

OK, this zombie virus movie is not strictly horror and may have been given a horror title just to pull in the punters but it is still a class and a half above other 2017 releases in this genre. Its cheesy fright-flick title can work both ways and certainly put off those who abhor the standard gore-fest and have seen it all. But rest assured the title is pretty misleading because ‘It Doesn’t Come at Night’, whatever it is. Well not much anyway.

Written and directed by Trey Edward Shults, there’s an unnerving atmosphere right from the early scenes. It’s conveniently set in the desolate outback where Dad (Joel Edgerton) is seen popping a cap into grandpa’s forehead while he’s still breathing before throwing the virus-ridden old man into a ditch grave and setting him alight. Mum (Carmen Ejogo) and seventeen-year-old Travis (Kelvin Harrison Jr) are understandably unsettled by this but dread a greater danger, a pandemic turning locals into zombies out there in the woods.

This is a prickly, psychological thriller that shows little in the way of the standard fare of swarms of rabid zombies – instead you probably catch sight of one the entire movie. Such gory overkills are not needed, not where this can be generated by signature cinematography and artful paranoia alone.

This particularly applies to the lost-looking, vulnerable and visibly disturbed Travis who pulls off this clawing sense of unease to perfection and sums up the paranoia of the whole movie. You’re never quite sure which way he’s going to flip with the creeping film score indicating at some stage he probably will. This is compounded by the arrival of another family fleeing the virus, who are not all they appear to be.

For those concerned it’s going to be another conventional (yawn) zombie apocalypse movie, or (bigger yawn) bump-in-the-night horror, you’ll be pleasantly surprised. For many the slow unraveling of claustrophobic story elements will prove entertaining but it breaks so many rules of the genre that purists may cry foul. Well anyway, this is a horror movie with a soul, a cerebral yet visceral account of family trauma that will have you wondering why there’s no obvious bad guy and searching for a standout good guy to root for.

It will be brutal in places you least expect – without the hatchet-wielding gore, which has been the genre’s easy way out since the 1970s. There are also tears shed when you expect the opposite. Deeper emotions expressed by both actors and audience than the shock-fear-panic gamut of press button reactions. The director uses this element of humanity in an unfamiliar but very profound way and, most importantly, without moralizing.

The only criticism is the sudden ending. Without giving too much away, much of this film’s power comes from subtly pushing beyond story-telling standards and giving what has become a very two dimensional genre a very three-dimensional soul and this is probably why the film ends so unexpectedly. There’s a sense that a couple of scenes are missing and as the credits roll you might ponder some unanswered questions. The answer about the missing scenes is no. To the question about whether it will split opinions, it’s a yes.