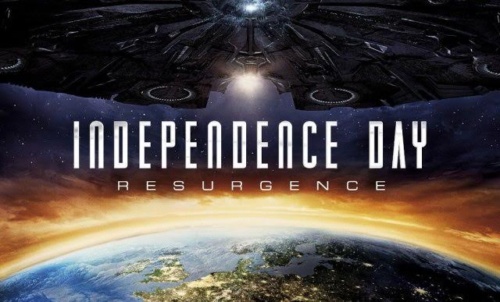 Jeff Goldblum isn’t cast a million miles outside of his comfort zone as gangling scientist David Levinson, in this alien invasion flick written and directed by Roland Emmerich. It’s been twenty years since the first Independence Day film and Levinson, now director of Earth Space Defence (ESD) is an environmentally concerned satellite engineer advising the United Nations against extraterrestrials threats, in his own inimitable way. Earth has remained threat-free for two decades but its unified defence organisation stands ready for any possibility which might emerge. And it does.

Having learned painful lessons from the invasion depicted in Independence Day 1 their updated military technology is impressively lethal. Earth’s scientists picked apart the alien war arsenal to refine mankind’s own power and accuracy. Unfortunately when they do fire they hit the wrong target. Alien yes, threat no. But the benign victim (which looks a lot like a very large billiard ball) holds no grudges and in fact wants to form a military pact with them against an even more frightening and deadly common enemy. One that boasts the firepower of a mothership 3,000 miles in diameter. Somehow, even with these monolithic developments the film is pretty predictable.

When Area 51 scientist Dr. Brakish Okun awakens from a twenty year coma (looking a lot like a long-haired 16th Century sage) and promptly informs everyone that these alien forces, whose fighter planes swarm like gigantic flies, can be thwarted by killing their Queen Bee in an explosion, it all seems just a little too easy. You already get the feeling those intergalactic swarms will shrug off this challenge like a bad cold because there’s still quite a bit of movie run-time left. So what you have here is a wafer-thin plot hitting its development arc on automatic and never really stretching the audience. The ESD pull off the tricky manoeuvre using force fields which contain the blast, focusing intensity inwards whilst preventing any innocent earthlings beyond the field from getting hurt. But lo and behold, the Queen Bee has her own force field protecting her from even this. A force field within a force field so to speak.

But well before we reach this apex point there is a prevailing sense of doom hinted at by the edgy mannerisms of former US president, Thomas Whitmore. Looking much the worse for wear after years out of office (and probably out of his mind because of telepathic attack by aliens) he lurches prophetically towards the danger as if only too aware of the sacrifice of service yet to come. He instinctively knows that all is not as it seems. You’re drawn in by his dishevelled sense of foreboding but no one listens until they wipe out the new president and all her entourage, including the chief of staff, in one go.

For diehard fans of sci-fi it may well tick all the right buttons as you cannot fault the special effects, but it stops short of anything cerebral enough to make it memorable. If it’s to venture beyond being merely entertaining it needs something extra rather than the overly simplistic ‘aliens kill humans, humans kill aliens’ plot line. For example, Prometheus (2012), directed by Ridley Scott gave you the aliens as engineers of mankind concept to muse over  – a sliver of something to digest during and  after the screening. An approach like that results in a captive audience always wanting to know more and seeking deeper explanations. But here you are given the full banquet, hog-roasted, garnished and everything. You can’t complain but perhaps the average cinema-goer who has seen it all won’t be satisfied with that no matter how big the banquet table is, so to speak. A tent-pole blockbuster that is great for the kids but that’s about it.