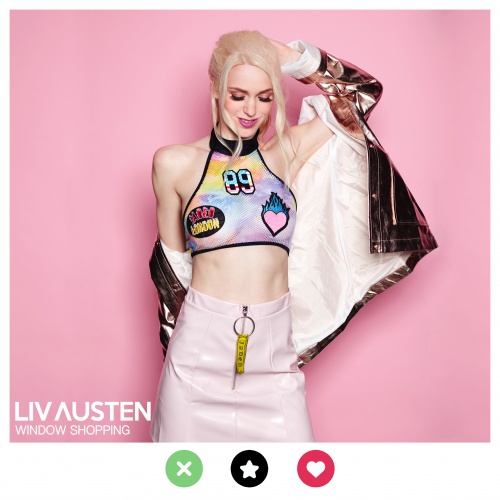 Norwegian-born singer-songwriter Liv Austen arrived in the UK in 2010 and soon found her voice as one of the hottest properties on the ever-expanding British country music scene. She’s become a key part of that explosion, but has the pop sensibility to cross over to the widest possible audience. The rave reviews that greet Austen’s every gig will soon be accompanied by similar acclaim for the debut album she’s making with her singular songcraft. Liv describes her music as “part Scandi pop, part UK singer/songwriter and part Nashville country”. Her new single Window Shopping is full of great lyrics and catchy melody hooks, which is what made people pay attention to her when she first came on the scene.

Austen wrote Window Shopping with Kaity Rae, a young, extraordinary songwriting talent, often mentioned as a favourite of Ben Earle of The Shires. Earle has followed and supported both artists’ careers from early on. He also wrote Liv’s 2016 single Over, released by Decca Records. Liv and Kaity bonded over their frustration with how superficial a lot of people are when looking for love. We are all expected to have a “type”, and the standard for young people is to judge who they want to date from a photo. Is the addiction to keep browsing for the perfect match preventing us from having real life connections and feel genuine attraction? Window Shopping challenges listeners to live life authentically, to “try someone on” rather than just tick boxes and expect love to be the result.

While taking inspiration from the great modern sound that is coming out of Nashville, the track is also undeniably European. The song’s use of English terms like “fit” confidently declares that there is no desire to mimic American artists. Liv ensures that her music is a genuine UK product, not just in how she writes and who she writes with, but also in her choice of musicians and producers. The song was recorded with London based producer Jon Wright. Liv also co-produces all of her own tracks. Liv says: “It is always a goal of mine to write something that’s fun and catchy on the surface, but holds a much deeper meaning for anyone who listens closely to the lyrics.” Window Shopping is a perfect example. Have a listen!