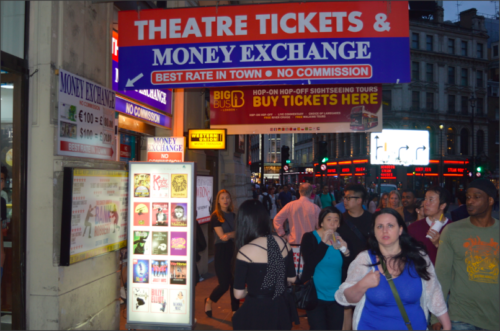 The once in a lifetime supermoon today is hopefully a sign of a super week for you! If you’re not one to believe in such things then why not check out the surefire signs of our hot picks of London events below.

Theatre: Red Candle – Mermaids of the East. This Japanese play not only mixes different genres of theatre but is also performed in an unusual setting – The Brunel Museum in Rotherhithe. A unique experience all round. There’s still time to catch it! Until Nov 20

Art: The Barjeel Foundation Collection. This exhibition, with the intriguing subtitle Imperfect Chronology – Mapping the Contemporary II, sees this massive collection of Arab and Middle Eastern art returning to East London once again. Until 8 January 2017 at Whitechapel Gallery.

Museums: The American Dream, Pop to the Present. Donald Trump’s election to some was an affirmation that the American Dream is alive and kicking. To others…well check out this exhibition of American culture at the British Museum to make your own mind up. Until June 2017.

Films: London Korean Film Festival. With South Korean zombie flick Train to Busan doing the rounds as a sure contender for horror film of 2016, this will whet your appetite for this remarkable short film festival at The Grand Buildings, 1-3 The Strand, London. Tues Nov 15.

Clubs: A club called Your Mum’s House and you’re still not curious? On the face of it it’s hardly a reason to grab your glad rags and round up your rowdiest mates if mum is hanging around! With Dalston always a hip destination this is the best bet for Hip-hop and Rn’B loving Thursday nighters who can’t wait until the weekend. The Nest, Dalston. Thurs Nov 17.

Bars: Hey you might want to check out Winter Pergola on the Roof at the former BBC TV centre in Wood Lane. Our own HOT IN LONDON team is hosting a chilled out Sunday meet up at this exciting new hang out on Sunday, Nov 20 https://www.meetup.com/WHLondon/events/235412382/

Family Attractions: Hogwarts in the Snow at Warner Bros. A studio tour of the making of Harry Potter at Warner Bros Studios, Leavesden. Until Jan 29 1017,