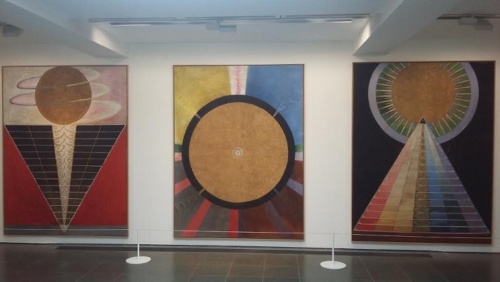 Swedish abstract artist Hilma af Klint’s emergence as a pioneering painter mirrors the career progression of many of her predecessors who were fated to remain undiscovered till after death. However, she may have had a hand in this. She died in 1944 but asked that her work not be shown publicly till twenty years after her death. But when this term was up things didn’t get off to a good start. In 1970 they were offered without cost to Stockholm’s Moderna Museet and flatly rejected and it was not till the 1980s that she gained recognition because of art historian Ake Fant championing her. Her increased standing in the art world down to pioneering work in abstract and automatic painting, beginning as early as 1896. So she predates greats like Mondrian, Kandinsky and Malevich in abstract art and the two Andres – Masson and Breton in the latter.

Taking the exhibition as a whole, the brushstrokes have an underworked, pushed quality. None of the crisp, bold, finish of a Mondrian but her deliberately laboured style and subdued palette makes the emotive content more marked. She admitted herself that she felt an almost supernatural spirit working through her and so didn’t change a single brushstroke regardless of how incomplete the painting might have looked. In this series there is a notable preference for the colours pink and black, figurative swans and mystical circles.

Her Paintings of the Temple series completed between 1906 and 1915 were based on the idea of an esoteric spirit of oneness in all things. This can be seen in her Altarpieces in the front gallery which show suns and spheres in geometric relationships with triangles, all of which have an Inca-like feel. One can immediately grasp that the sun is the focus for the eye here but the other geometric shapes hold deeper significance and are not merely decorative. Perhaps one could say the rung-like markings on these triangles depict a ladder to the higher self – the sun – and the journey to it is not always a straight or obvious path. And with that discovery of self comes the revelation that we are all one.

The painting Swan, No. 1 would be an apt symbol for a Benetton colours of the world ad campaign. Here they are black and white and caught in a kissing action. The white swan has a black background and vica versa for white. Klint used swans and doves to put across her theological and spiritual messages and here they are defined as separate because of their colour but the surrounding cosmology as indicated by the canvas background suggests otherwise. The message about spiritual union and oneness is a strong, all-encompassing one.

Hilma af Klint: Painting the Unseen is on at The Serpentine Gallery until May 15th.