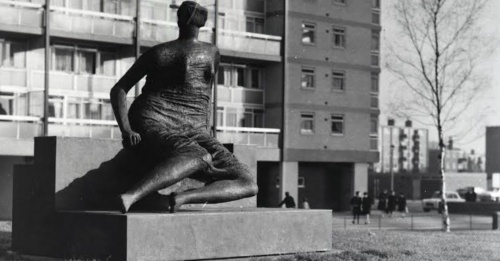 A Henry Moore is returning to Tower Hamlets, East London, yes, even though he’s from Yorkshire and been dead for 30 years. A sculpture of his, that is. His Draped Seated Woman was created in 1957 to express his experience of the Blitz which of course also levelled much of the East End. Local cockneys affectionately referred to the statue as Old Flo until it was spirited away from it’s home outside some tower blocks on a Stepney estate  – not by thieves but authorities concerned that the £20million sculpture might get stolen or vandalised. What a terrible stereotype for decent working class East Enders! Anyhow, it was kept at the Yorkshire Sculpture Park for two decades until a recent ruling gave ownership back to Tower Hamlets and away from Bromley Council.

Triggering the see-saw of events was former Tower Hamlets mayor Lutfur Rahman’s determination to sell it off which produced a backlash from campaigners and art lovers determined to protect it and wrest ownership from the borough. However, Rahman was later unseated in disgrace because of other contentious issues during his leadership and current mayor John Biggs had always pledged to return the three metre, 1.6 tonne work to its former East End home. The High Court has ordered the figure to remain in Yorkshire until October 2017 but the implications for public art in East London are far-reaching and irrevocable. A jubilant Biggs claimed that Old Flo will be a focal point for culture and education in the borough.

This sculpture is a valuable acquisition because Moore produced only six of the casts. The form of the work is typical Moore, who focused on large-scale bronze works featuring female figures, in some cases semi-abstract and generally for public art commissions. This son of a coal miner who, himself, later worked as a teacher but became wealthy through his well-cultivated talent would no doubt appreciate his works being the centrepiece for art appreciation and education in a working class London borough.