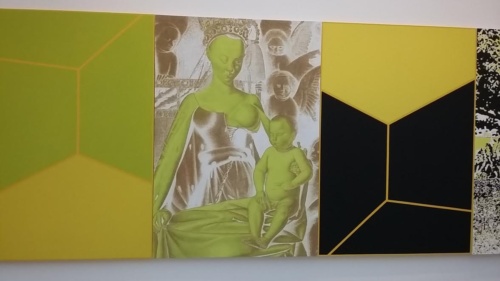 Religious iconography is underscored throughout the large scale abstract works in this, Henri Brande’s first exhibition in the UK, giving the already hushed environment of the white-walled gallery space an even more hallowed atmosphere. Added to this an air of mystery about an artist who not only preferred to work under the radar for half a century but also never titles, dates or even sells his work.

The Saatchi is bestowed with the honour of being the gallery of choice as he has announced each country only gets to see his work once. The concept of making something more desirable through scarcity works wonders in economics and this modus operandi may yet prove fortuitous for Barande by accident rather than design. Not that commercial drives are at the heart of his work. On the contrary, he claims the fact that he doesn’t seek to sell anything frees up his creativity.

There is variety in his approach and across the palette. In the front gallery a carefully balanced smorgasbord of geometric shapes in primary yellows and lime-greens, abstract prints and figurative hints – in many instances sharing the same large scale canvas. The chessboard pattern prints he uses to suggest a hint of Da Vinci’s Last Supper, can only be appreciated when stood a good few feet away. Stand too close and you’ll be in pointillism territory and find yourself examining each elemental black and white square waiting for something to ‘happen’. Happen it won’t!

As his countrymen French painters George Seurac and Paul Signac discovered in 1886 when they invented the pointillism style of painting using tiny dots, the whole of the parts is, indeed, greater than the sum. This quote by Aristotle’s quote holds true from both an aesthetic and spiritual perspective since many of these paintings actually cease to exist as figurative depictions during such closer examinations, reminding one that microscopic investigative study may be its own irreconcilable contradiction. Quantum physicists take note!

And while we’re on Aristotle, the great philosopher also gave us another quote: ‘art is imitation’. Barande’s pointillist version of Gauguin’s ‘Arearea’ at first glance supports that. However, imitation is only part of the story. He reframes this instantly recognisable painting in our consciousness by not only making us physically readjust our gaze to see the image emerging from the collection of dots, but also we reevaluate our concept of what representational art actually means. The glaringly abstract sections of these canvases compounds this even more.

And it’s not just religious figures on show. Other paintings depict women who wouldn’t look out of place on a catwalk – and also the face of a Yoko Ono-lookalike, side on, supine and with a reverent quality not a million miles from his Egyptian-influenced Virgin Mary and Child exhibited close by. Perhaps from his perspective these female figures are all somehow subjects deemed worthy of worship across history and societies. Then again, the etiquette of silence and wonder adopted in galleries finds parallels with churches and temples and can impose this subconsciously. The paintings without titles leave no clues.

Henri Barande exhibition is on at The Saatchi Gallery, 4 – 30 Oct