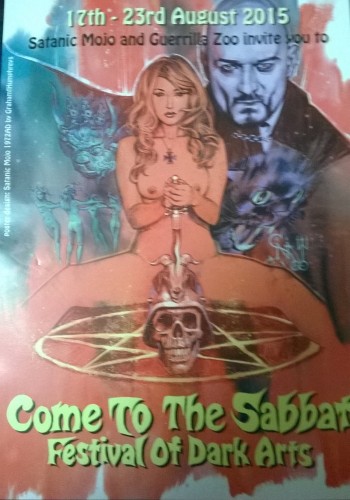 The Sabbat Festival of Dark Arts exhibition is all things dark and taboo  with a touch of humour.  The forbidden (read evil and horrifying) practices and rituals from paganism, shamanism, witchcraft, wicca is what you are up for in this exhibition.

Artwork reproduced from an old horror film Satanic Mojo 1972 AD stands out on the walls. Particularly compelling is the tarot imagery of  High Priestess major arcana in the form a naked woman with a skull and a sword in between her legs while a book with the symbol of wicca lies by her side. This mesmerizing portrait is also the promotional picture on the flyers of this festival and we can see why. Another reference to tarot is the picture of Magus or Magician again reproduced from Satanic Mojo 1972 AD.

Further down is a dark room with a revolving strobe light. You might be a little flummoxed as to what the purpose of the revolving strobe light is? Are we supposed to stare? Is there paranormal activity going on? Bah! Move on. Up next is a hall with UV lights. Do not enter if you are sensitive. The goat horned devil aka Satan stands out in the pagan artworks. Peering through the curtain is what might have been a shaman or a witch’s bedroom. A single mattress with plenty of magazines including some with pornographic content lie strewn on the ground. A naked doll lies upside down from the ceiling. Did they practice voodoo, you wonder. A  small TV screen flickers. Is there a spirit in there? An archaic looking music player revolves on the other side while an animal carcass lies on a stand. The objects in this mysterious room fuel your imagination.

Amongst the next set of artwork is a particularly gruesome collage of the Satanic Summer Tour. Terrified women in bondage being cannibalised  and mutilated by a sword pointing towards their genitals. Ouch! 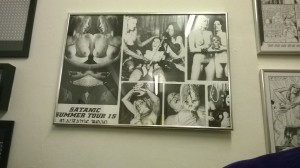 Next up is a scale model of the Desert of Perdition and a haunted house. Outside of this room is a small bar with some
more artwork and pictures on the evil satanic theme.

Following this recitation was some fantastic singing by Geeta. Songs tinged with nostalgia and yearning, she hit the high notes beautifully. Sheer talent.

Overall there isn’t all that much to the exhibition housed in the small Aviary Studios at Hackney with its tattooed, free spirited hippy crowd of visitors. The festival is not that spooky despite the disturbing images as the humour in art work  lightend things up. However, the ambiance, Gothic dressing amongst performers (and some in the crowd) ,the scent from the incense sticks compels you to wonder if there is a force if not as benevolent but just as powerful as God.

The Sabbat festival of Dark Arts exhibition by Guerrilla Zoo artists and musicians is on at the Apiary Studios on Hackney Road from  August 17 to 23.