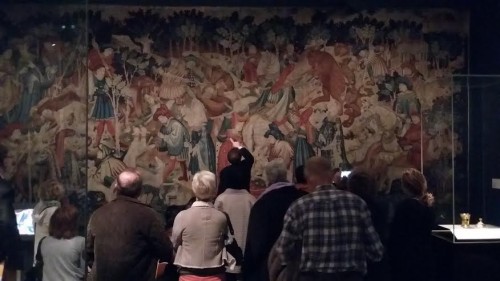 Described by the guide as the oldest and largest museum in the world, (the prior fact debatable the latter fact certainly possible) this tour kicks off every day 11.30am sharp at the Victoria and Albert Museum’s grand entrance. Even the most learned historian would struggle here as a visitor so you soon realise this free service is much appreciated.

An eager crowd of tourists and art lovers gather even as the tour begins and we are ushered into a room of exhibits marked 300-1500 Europe. Our well-spoken, avuncular guide encourages audience participation as he launches into the first exhibit, one half of a carved ivory Roman diptych (two-fold image) called The Symmachi Panel (400AD). Made for a rich, successful Roman family called The Symmachis it’s a valuable insight into the lifestyles of the elite.

But despite its elegant depiction of a priestess at an altar, it has nothing on the next scene-stealing exhibit The Tabernacle (1180AD) which unfortunately for the Symmachis stands right next to it. This gilded miniature church is hollowed out and once thought to contain the remains of a saint. Modern research has shown that it is no such reliquary but was still voted the finest object in the museum in a poll of visitors. However, there are other reliquaries that did contain remains.

The Beckett Casket was created to hold body parts of Thomas Beckett when he was assassinated by four of King Henry II’s knights in Canterbury Cathedral. Beckett was warned of his impending doom but refused to close the cathedral gates and was promptly beheaded there. Made in Limoges, France it is the earliest and largest reliquary in the world and was acquired by the museum back in 1990 for £1million.

For fans of classic English needlecraft, The Syon Cope is worth seeing. It is a semi-circular fabric worn over a priest’s shoulders but this one was made in the 1300s with tapestry-like bible inspired figurative work copied from art on the ceiling of St Paul’s Cathedral. Talking of tapestry you cannot miss (literally) The Boar and Bear Tapestry at the furthest end of this exhibit room because it is so large it covers the entire wall. If you are wondering why the women seem so well-dressed in the work, boar hunts were also social occasions. So well-dressed in fact that designer Laura Ashley was inspired by the frocks and based one of her dress designs on them. Now that’s what you call timeless fashion sense.

My personal favourite is Leonardo da Vinci’s notebook. And it is just that, a handwritten notebook. We are told that da Vinci was left-handed and experts have added weight to its authenticity by proving it was written by someone writing in that manner. The master’s scribbles describe a prototype for an industrial digger for canals complete with blueprint drawings and also some bizarre tips on how two men can carry a third across a river. Da Vinci typifies the flowering of the Renaissance in Florence, itself the cradle of Europe’s scientific and artistic revolution so this item is not to be missed.

The tour was such an engaging experience that even when the guide said ‘time’s up, you can all go home’ but offered to squeeze in a quick peek of the tomb statues of Wolsey’s Angels, everyone stayed!