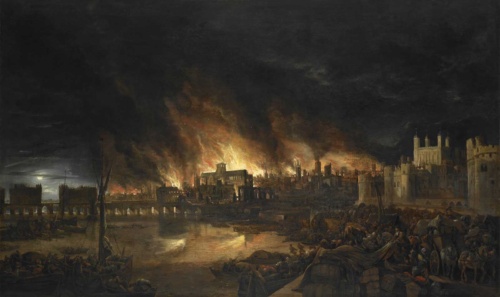 ON THIS DAY on the evening of September 5th 1666 The Great Fire of London caused its greatest destruction. It began in the bakery of Thomas Farriner on Pudding Lane near London Bridge. On September 2nd the first flames swept westwards through the City of London and would eventually damage 90 per cent of the capital’s total houses and 100 parish churches.

The destructive power of the fire triggered civil unrest with unfounded rumours that French and Dutch immigrants had started it. Riots broke out and some of these immigrants were lynched in the street. French watchmaker Robert Huth confessed under duress that he had started the fire acting for the Pope and Catholics. There were many holes in Huth’s confession as at first he said he started it in Westminster later changing his mind to Pudding Lane when forensics later revealed the true location. He was hanged despite doubts about his story and the methods used to obtain his confession.

The military were commended for creating firebreaks in the path of the fast-moving flames as it swallowed up the wood-built city. This meant demolishing houses that lay in its path. Fortuitously, the east winds that had fanned the flames gradually dissipated. Lord Mayor Sir Thomas Bloodworth was criticised for weak leadership as he dithered over giving executive orders to the military and unwittingly helped the Great Fire become near uncontrollable. Instead, Charles II oversaw the operations to contain the tragedy.

Ultimately, socio-economic issues led to the Great Fire of London. Residents in the overcrowded poorer parishes had for centuries continued to build cheap homes out of wood and thatch even though these highly flammable materials had been banned. This was also the era of open fires, urban ironsmith forges, kilns and illegal, unregulated stores of gunpowder.