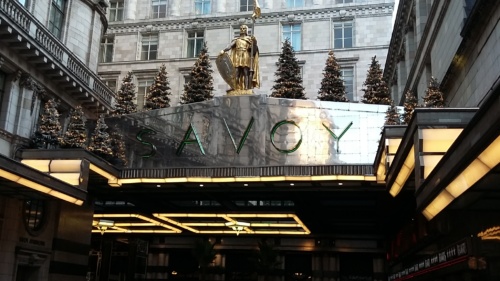 When Gordon Ramsay first took over the prestigious Savoy restaurant he banned casual dining wear because he didn’t want to sully the elegant 1920s-style ambience. He went back on his decision as market forces reared but there was little sign of jeans and trainers in the first week of October. This Michelin-starred grill restaurant benefits from both the Ramsay and Savoy names and expectations are always high with its five-star history linking it with celebrities and royalty alike.

And the pointers to this 100-year link with Hollywood are notable as you enter. The black and white photos showing Humphrey Bogart relaxing in the restaurant with Marilyn Monroe are nods to the high-status clientele but none of this is vainglorious, instead there’s a commanding simplicity in its elegance; in the overall decor and on every table. These tables have a small golden table light ornament and a silver two-piece condiment set – that’s it. Oh, and a small matter of the champagne bucket stands at every table.

There are a variety of signature meals depending on your requirements. Pre-theatre, post theatre even star deals of three courses for £26, you’ll find Ramsay has got it all covered. And with more than a little help from the Savoy’s first ever head chef Auguste Escoffier. Even though he’s been dead since 1935, he’s stamped his mark on British cuisine leaving an undeniable French flavour. His Escoffier Menu still exists today as a Savoy tribute to his culinary skills.

So let’s get down to dinner. A starter of cream of celeriac soup with truffles and roasted shallots is well recommended and despite the small serving its best to remember that truffles are amongst the most expensive foods in the world by weight and quantity. Faultlessly prepared, creamy, easy on the palate, and, yes, you can savour first-hand that gourmet signature and French influence which favours quality over quantity.

The main course of venison and game faggot with swede mash and January king cabbage will always be an acquired taste for those unaccustomed to the richer flavour of this type of meat. The meat ball is cooked to a crumbly degree of reddishness reaching discerning levels of gourmet pickiness in every aspect of its seasoning. Venison is healthier than most meat because of the wild deer’s artificial hormone-free diet. It’s one of the few animals that are not cattle-farmed factory style or pumped full of chemicals to meet the demands of a mass market.

The restaurant deserves its five-star reputation and the manners of the staff are impeccable (as you’d probably expect in any restaurant). You’ll also be surprised to find they have menus for those who don’t have a superstar budget.