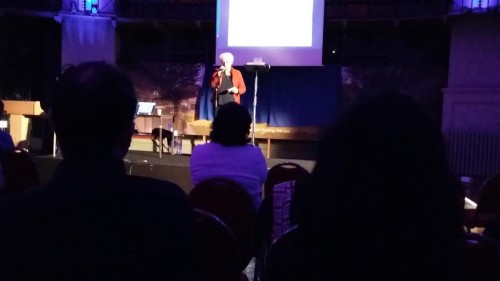 The Globe Road Poetry Festival  held November 13-15, 2015 brought together local and global poetry at The Octagon, Queen Mary University of London, and coincided with the launch of its research facility the QMUL Centre for Poetry.

As expected the audience interaction turned out to be something out of the ordinary. Members of the audience were invited to use festival telephones to listen to poets in Bangladesh and also to challenge the meaning of poetry in open discussions while seated at long debating tables. For those seeking a breathe of fresh air, there were walking poetry tours in the backstreets of the East End. For those who preferred to just sit there hunched over their phones, there were poetry apps for the mobile-savvy.

Saturday evening of November 14  included a performance by multimedia artist and performer Caroline Bergvall. Although visibly affected by the tragic Paris terror events the French-Norwegian poet bravely continued with her work, which actually included a protest film installation about the kidnapping of terror suspects by CIA-led Extraordinary Rendition. Her text readings swung from English to French and were liberally interspersed with similar film projections including Drift 2013-2105 an experimental piece which uses text to express her concerns about the migrant crisis.