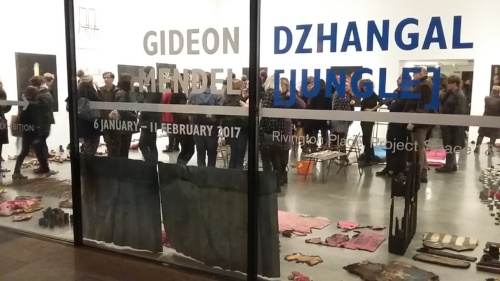 On October 26th 2016 the French authorities announced they had completed a clearance of thousands of migrants from the Calais ‘Jungle’ camp. The debris and remnants of this makeshift village for those desperate to get to Britain have been collected and photographed by Gideon Mendel acting as a documentary on their tragic circumstances.

This modern-day exodus of those fleeing the Middle East and Africa may have been dehumanised by some elements of the press and even photographer Mendel felt the refugees discomfort when they saw his camera. He was originally there to teach photography but his displayed children’s discarded toys are a heartbreaking wake up call to those who have distanced themselves from their plight.

There are also lines of forgotten and battered footwear not too far from similar rows of the spent shells from tear gas canisters they were probably fleeing at the time when they lost these items. Some of them have even been framed: photographed as they are complete with well thought out composition and lighting with a tragic aesthetic irony.

And talking of irony, there’s one photograph of a doll which is quite unlike the others. It has been cleaned up and has a big bright smile with its hair raised as if jumping for joy. This may or may not be a symbol of a positive spirit but cannot fail to come across as even more heart breaking than the other grubbier toys precisely because of this. It’s almost as if you are drawn towards it like a purple fish in a goldfish bowl and find difficulty compartmentalising it emotionally. In that case it has done its job and made you take heed of their plight.

Similarly, there are rows of discarded toothbrushes framed as if a painting. Even the battered frame is a cast off. Each item and the manner of their presentation, then, a documentary-style narrative about these faceless victims and their experiences. It’s shocking to know that this is the unspoken account of just a few and the harrowing tales probably run much deeper.