Home  /  Reviews, Shows & Exhibitions  /  Gavin Turk: Who What When Where How & Why (Exhibition)

Gavin Turk: Who What When Where How & Why (Exhibition) 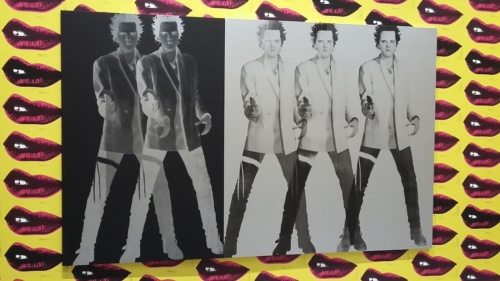 Review of: Gavin Turk: Who What When Where How & Why (Exhibition)

Artist Gavin Turk has hooked up with his fellow YBA pal-turned gallery owner Damien Hirst for this retrospective at Hirst’s impressive £25 million Newport Street Gallery in Vauxhall. The YBAs (Young British Artists) emerged in the 1990s as a Hirst-led movement that challenged the art establishment, so decades later this modern-day Turk-Hirst tie up has all the elements of a match made in heaven.

Turk failed his postgraduate degree at Chelsea School of Art (1986-1989) because his degree show Cave was just an empty exhibition space with a blue heritage plaque bearing the words “Gavin Turk worked here, 1989-1991”. This same piece is shown in this his first solo exhibition since 2002 as perhaps some sort of celebratory two-fingered salute. Or is it? Beyond this seemingly rebellious act lies the aesthetic and philosophy at the heart of his work, dealing as it does with issues of authorship and identity. Turk’s signature and persona as an artist are central to all the work on display.

And this signature is everywhere. On a displayed blank white piece of paper, unevenly torn, but at least the signature is nice and central on the blank canvas. But that’s not the point. The point is the engagement of the public in this open discussion about the processes that define the artist as ‘artist’. Again, next to it his signature carved out in the corner of another empty piece, an otherwise blank cardboard, will render this discourse redundant without forewarning about his Duchampesque ‘readymade’ art ethic. Duchamp believed anything with a signature was art and even Picasso once gave a fan his signature, declared it was art and told the fan to go and sell it!

The work is certainly varied because on the opposite wall a spidery sculpture (Unoriginal Signature, 1996) with blue bursts of sponge-like moulds runs its entire length seemingly out of place in a room that rejects the concept of signature-style (not a play on words) whilst at the same time embracing it. This first gallery room is set up then as an introduction to his mercurial and diverse approach.

There’s an unashamedly pastiche Jackson Pollock room which opens with black and white photos of Turk showing himself working on his drip paintings. This focus on authorship and identity becomes apparent when you realise that the drip design is actually his signature repeated over and over again. This aesthetic appropriation is also underscored by the four mirrored cubes in the centre space which is an exact replica of a 1965 sculpture by artist Robert Morris – bar the smudges of grey, green and beige colour-coded to match the palette of Turk’s drip-paintings. Hey even the gallery walls are beige!

And if you’re in any doubt about this pastiche/cultural appropriation theme then wait until you get to the next gallery room. OK we’ve had a Pollock Room and this is certainly the Warhol Room with screen prints reproduced like garishly coloured gallery wallpaper depicting Turk as Sid Vicious as Elvis. Andy Warhol once took a movie still of Elvis starring in the western Flaming Fire (1960) and produced a silkscreen painting called Eight Elvises (which later sold for a cool $100 million). Turk has Sid Vicious in place of Elvis then plonks his own face on Sid’s. If you’re not sharp you can get lost in this shape-shifting play on celebrity culture.

Turk turns to art history to complete and in his exploration finds an interesting conundrum. You see in the final gallery space he has a statue of Ariadne and this is presented as an ironic homage to painter Giorgio de Chirico. De Chirico was obsessed with the myth of Ariadne and spent the latter part of his career basically painting the same thing over and over again. The intriguing parallel emerges from his 1909 to 1919 period when De Chirico was hailed as an influential avant garde who set up the scuola metafisica which inspired the creation of another movement – The Surrealists. However, De Chirico later rejected this in favour of traditional back to basics classicism and this drew the ire of The Surrealists who had idolised the unbridled way he once challenged aesthetic norms.

So whilst Turk’s final piece turns back the clock to draw inspiration, it draws this from a man who eventually rejected the very kind of exploratory discourse Turk is now engaged in. Deliberate? An apt question to be asked at an exhibition with the equally apt title of  ‘Who What When Where How & Why’.

At the Newport Street Gallery until March 2017. Free entry.