From Myth to Earth (Exhibition) 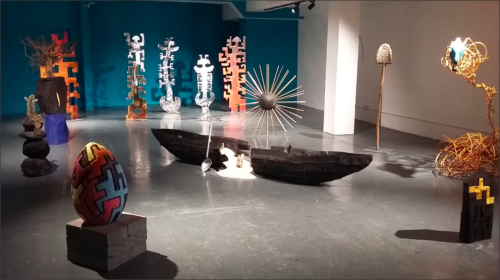 Review of: From Myth to Earth (Exhibition)

This exhibition of sculpture, paintings, photography and sound installation at the Koppel Project Hive, Holborn is inspired by artists Sol Bailey Barker and Gabriella Sonabends’ 2014 sojourn to Colombia where they lived amongst villagers, gathering first hand tales and myths even as civil war erupted around them. This research formed the foundation for much of their current show, with their interpretations of local culture translated with respectful artistic license.

Their Arts Council sponsored event opened with the unveiling of the showpiece sculpture Forms Shaped Through Time on Holborn Viaduct. The two totemic pieces gently lean into each other forming something of an arch along that busy road from Chancery Lane to Holborn, inadvertently interrupting the trafficking of commuter existence, interjecting it instead with the mythologies of symbolic doors and gateways. For the ancestral Colombians, a road well travelled now offered as a spiritual antidote to rat race consumer rhythms of life.

The indigenous tribes featured in their research definitely have a cultural rhythm in stark contrast to the world around Holborn Viaduct. Seeing themselves as weavers of the planet, they use the weaving analogy in much of what they do including how they walk. Walking in a weaving formation to honour the earth means they take a lot longer to get to their destinations but perhaps the journey and destination are less important than the spiritual element. Living in a fast-moving capitalist democracy one can often get caught up in the A to B and 1,2,3 logistics of life but the truth is often found whispering beyond these rigid logistics. Some of these tribes and villagers have become expert ‘whispers’ and listeners over hundreds of years.

These 3D works are not the only way the Colombian way of life is represented. Award winning artist Gabriella Sonabend has used her storytelling skills to capture the cultural and political landscape. Also her paintings of locals, although figurative, have a jarringly expressive element, suggesting the energy of these individuals is unyielding and positive in spite of their circumstances. Both artists pointed out during a gallery talk that these pieces are not cultural appropriation but rather an opportunity to share the Colombian experience and history. There are also humbling pointers to the war which has continued since the 60s – look out for Bailey Barker’s sculpture of a spade made from 300 spent bullets. The couple have also written an accompanying book which took three years to compile. Priced at £25, this is also available for purchase at the exhibition.

From Myth to Earth runs at the Koppel Project Hive, Holborn Viaduct until 29 October 2016.