From Ebola to Isis 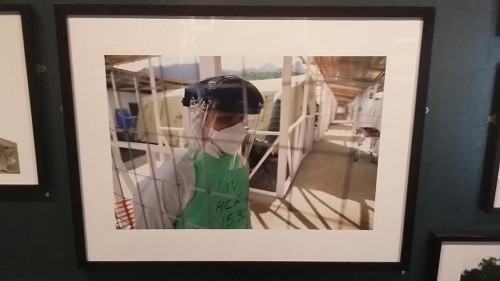 As we move into the early days of 2016 last year’s numerous international conflicts, natural disasters, health and development issues remain on the global conscience. The Fighting Extremes: From Ebola to Isis exhibition at the Imperial War Museum highlights the role of the British armed forces in this respect with displays reflecting the range and complexity of their duties when called to deal with such emergencies.

As one climbs the staircase to the exhibition you cannot fail to pass other unrelated exhibits dedicated to the theatre of war. Guns, infantry items and tanks through the two world wars, and looming not to far from our desired location the two foreboding replicas of the first atomic bombs. These serve as a frightening evolution of modern international conflict culminating in the current conflicts in the Middle East. Humanity can take some comfort that in 2015 technology and servicemen have also been deployed for humanitarian and medical efforts in Sierra Leone fighting Ebola. 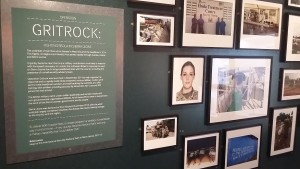 Interactive timeline displays show the progression of this disease from its outbreak, coinciding with the 2014 withdrawal of British troops in Afghanistan following thirteen years of engagement and their deployment to Sierra Leone in mid-July. A gallery of photos show how Operation Gritrock was managed with details of the security procedures and medical manoeuvres which were vital in controlling the outbreak. This included the manning and provision of the six treatment centres used to quarantine and treat patients.

The large, high quality images of staff wearing mouth covers and helmets with visors lowered leave you in no doubt that they are dealing with a deadly virus but the overall atmosphere is one of clinical efficiency, hope and triumph. A focus on the smiles of a successful operation rather than the grim pictures of the ravages of disease. One of the rarely seen items on view is a make-shift washing device called a tippy-tappy where personnel can wash their hands in chlorinated water to help contain the spread of the virus.

However, as one might expect in a war museum, conflict dominates as an issue of international concern. The exhibition shows how the emergence of ISIS (Islamic State of Iraq and al-Sham) led to the deployment of Britain’s Operation Shader to counter their gains. Interactive displays show the timeline of events leading to the eventual call up of British troops in August 2014 after initially being involved in relief efforts to the besieged Yazidi minority in Iraq. Displayed items include cut-out figures used by the army to give Kurdish Peshmerga fighters target practice. Also on display is an RAF pilot’s headset for an MQ-9 Reaper ‘drone’. This was used for surveillance and reconnaissance before mounting attacks. Described by museum director-general Diane Lees as “one of the most contemporary IWM has shown” the exhibition informs on how technology is keeping pace with the demands of conflict and also how it can be deployed in peacetime.

Fighting Extremes: From Ebola to Isis exhibition is on the Imperial War Museum everyday 10am – 6pm until  November 13 2016. Admission to the museum is free.