Forensics – The Anatomy of Crime Exhibition 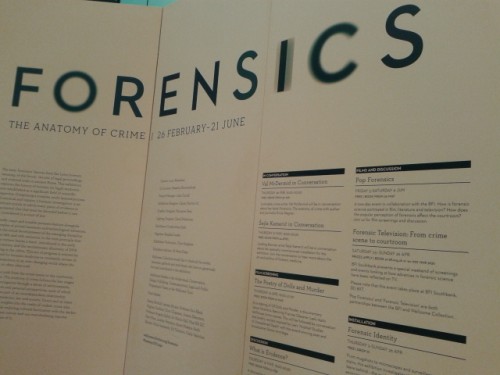 Review of: Forensics - The Anatomy of Crime Exhibition

As an aficionado of Forensic Files, Medical Detectives, CSI and other crime investigation series, I wondered if the nitty gritties of forensics in an exhibition will hold my interest as much as it does on Television. However, the very theme of forensics had me enthused for a visit, which is how I found myself at the Wellcome Trust Collection on Euston road on a fine Thursday evening after work visiting Forensics- The Anatomy of Crime exhibition.The exhibition spanned five rooms displaying the sojourn of unnatural, unexplained death from crime scene to courtroom. A series of visuals, scale models, forensic tools, archived documentation and film clips exhibited the  forensic practices prevalent in the late 19th century as well as advances in forensic science in recent times. There were many exhibits in each of the five rooms that held my interest.

The exhibits I was drawn to in this room were the visuals from late 19th century depicting unnatural deaths in the bath and the kitchen. Next, a set of visuals showing 10 stages of death defined in forensic parlance.

There was also a series of scale models by Frances Glessner Lee circa 1940 that were used to re-enact the murder scene in a home. Exhibits also included the first formal photography in crime scene investigation with the use of a tripod. Of particular interest was the documentation on maggots and insects used in forensics to determine the time of death. As insects only flock to a dead body where upon they lay eggs, the age of the larva was used to determine the time of death.

The investigator’s tool kit with the finger printing brush and other forensic instruments from that era was also an interesting item on display.

This was undoubtedly my favourite room in the exhibition. The place where a body is dug deep with a scalpel in an effort to uncover the cause of death through autopsy or postmortem. Morgue or mortuary has french connotations so is it any wonder that there was some interesting history on early morgues of France in the late 19th century? The exhibits that I liked in this room was the autopsy of body part models showing a cranial laceration through blunt force trauma. It got me thinking of the force required to break a coconut. That’s the amount of force it would require to break a cranium and cause a brain injury or death! The knife penetration on a liver and the bullet wound were interesting displays.

The most riveting of all was a wax face mask of L’inconnue de la Seine or the Unknown lady of the Seine. As per the story, a pathologist who examined this dead, unidentified woman drowned in the Seine was so captivated by her beauty that he decided to preserve it in a wax mask.

I also ended up spending a good half hour over 20 hand written notes by pathologists that the visitors could read through 20 slides on a touch screen device documenting findings from unnatural, unexpected deaths ranging from food poisoning, coronary artery disease to miscarriage that occurred in the late 19th century.

The place of forensic analysis. The scene of action. I liked the exhibit and clip on blood splatter pattern in modern day forensics especially useful when a crime scene is staged by the perpetrator but the pattern of blood splatter tells a different story of what actually might have happened. The exchange principle and transfer of objects from the perpetrator such as hair, saliva, finger prints, semen, blood and skin cells for DNA had me thinking ‘I know about this’ from my TV shows. As did the picture of  blood that was wiped clean still detectable by Luminol. Early use of finger printing, iris colours and composite sketch sets of eyes, nose, jaw and other facial attributes used by Police to create a composite drawing of the suspect based on eye witness account was also a good watch.

The search for the missing persons, which leads to the reconstruction and identification of the skeletal remains (if and when found) is both a forensic science and an art.  Early days reconstruction of Mary Rogers who disappeared in Lancaster in 1935 from an unidentified cranium was exhibited through some powerful images.

The two film clips in this room although heart wrenching provided a beacon of hope wherein forensic science is being used to locate missing or dead persons. One of the clips showed a sad tale of identifying the dead family members in war stricken Kosovo in the 1990s. The other film was on the search for missing people in Chile who disappeared during the military regime of 70s where forensic anthropology helped determine their identity from the bones found in the Chilean desert.

The crime scene has been investigated, the cause of death determined, the evidence from the crime and perpetrator analysed, in the case of missing body or frugal remains, the victim reconstructed and identified. What next? The law of course!

The law can only be enforced with infallible evidence against the perpetrator of the crime.The courtroom had some historical images of the Old Bailey court where crimes were tried. The highlight of this room was however, a series of old film clips of courtroom where forensic evidence either helped convict a suspected criminal or the lack of it set them free.

As I exited the dim lights of this exhibition to face the bright spring day light of late evening. I noticed almost two hours had passed. The one thing I took away from this exhibition was that there can be answers to mysterious questions even after the silence of death. Thanks to forensics. 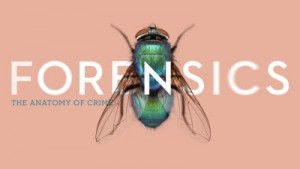 The Forensics- Anatomy of Crime exhibition is on at the Wellcome Trust Collection from Feb 26 until June 21 and is free of charge. Go visit now, if you haven’t already.