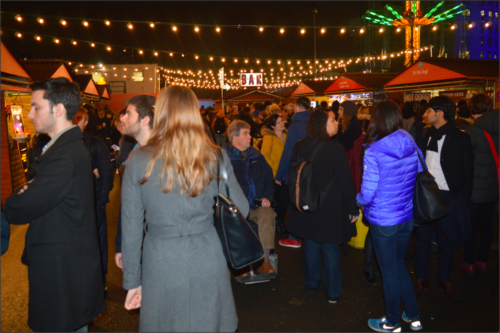 The Southbank Centre Winter Festival was a pop-up feast for fast food hordes who were after something a little bit special beyond your average wings and fries. It’s inevitable after visiting the festival’s Christmas stalls along the Thames and taking the kids to the centrepiece Merry-go-Round that those gastronomical desires will pick up as those savoury smells waft down the river.

And the choice is wide, with an array of international quick-cuisine for everyone’s needs. The Foda Stocks Swedish Cafe sells a host of familiar favourites: cappuccinos, coffees, sandwiches, snacks but oddly enough no specifically Swedish delights. Perhaps catering for those who want a taste of Britain? Hmm.. However, other pop-ups such as Speckmobile Taste of Austria, Polish Deli and The Frenchie were true to their home nation’s dishes. Also there’s the Indian street food eatery Horn Ok Please catering for vegetarians and Bombay Street Food with similar dishes for meat eaters.

The recommended must-visit is the Shrimpy stall which as you can probably guess from the title sells shrimp-based snacks. Their delicious shrimp-burger ‘The Shrimpster’ comes either grilled or deep fried and served with avocado salad. A nutritious burger alternative when you’re eating on the go and finding it hard to fight your fast-food pangs. Unfortunately, they haven’t yet opened a high street franchise and operate only as a street food outlet and at festivals such as this. Such a shame. It’s well beyond time that an international health food chain expanded out into the high street in a big way. The future of the nation’s obesity problem lies as much on these streets as in the culinary confines of our homes. So get shrimping Shrimpy! They’ve been operating for three years and admitted they plan to open their own restaurant, so we hold onto hope.

And as the year comes to a close one question – did 2016’s popular Anglo-Saxon and Viking TV mini-series such as Beowulf: Return to the Shieldlands have you reaching for a glass of mead instead of Stella on many a chilly evening? Because as luck would have it this alcoholic beverage, which was first produced around 1100BC and is brewed from honey, is also available at the festival – and comes with a shot of Kraken rum. It has a bit of a kick, you can taste the honey and it will warm the cockles. With a glass of honeyed mead in one hand and a Shrimpster shrimp-burger in the other you just can’t go wrong. Just keep telling yourself 1) Hey it’s Christmas 2) It’s pretty nutritious stuff!

The Winter Festival at Southbank Centre is on until January 2017.