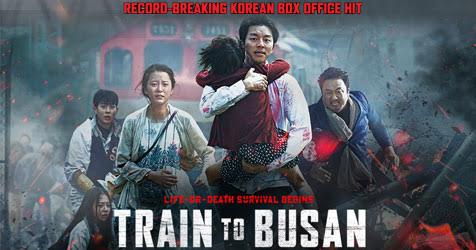 Review of: Train to Busan (Film)

One of the most common criticisms of horror films is they have all the gory detail and special effects down to a tee but little novelty or meaningful plot development. At first glance, South Korean horror movie Train to Busan is, when all is said and done, another zombie flick. But from the off you know that this doesn’t have the pacing of a traditional horror film. Slow, deliberate and fully fleshed in the early scenes, it draws you into the main protagonists world with an attention to characterisation some may be unaccustomed to in this genre. That said, there is method in this zombie madness because by the time director Yeon Sang-ho starts flinging these rabid zombies at the unsuspecting commuters during this unexplained outbreak, you are so entrenched in their lives as real people that there is extra depth to their impossible plight. Regardless of how many times you may have watched something similar.

And you certainly haven’t seen anything like Train to Busan. Fund manager Seok-woo (Gong Yoo) has an uneasy relationship with his daughter Su-an (Kim Su-an) and you can tell he’s the busy, over-worked, over-committed father who doesn’t figure in her world despite his unconditional love. His recent divorce perhaps accentuating this estrangement and making her pine for some real motherly attention. Her mother lives in Busan, hence the trip to Busan when she demands that he take her there as a birthday gift.

You already have an inkling that this isn’t going to be an everyday train journey when in the opening scenes a deer killed in a hit and run stumbles back to life with wickedness in its hollowed out eyes. That metaphor of the meek, innocent deer now reeling with evil contrasts with another such sign in reverse – a nefarious-looking down and out huddled on a carriage seat mumbling ‘they’re all dead’ and looking to all extent and purposes like a zombie-type himself, or at the very least a potential carrier of the latent zombie plague. Yet he turns out to be a good guy who sacrifices himself to save others. To underline this comparative saintliness despite his rags, his polar opposite a portly, well-fed sharp-suited businessman goes nuts when all hell breaks loose and hurls everyone and anything into the path of the zombies to save his own sorry soul. There’s a moral lesson here.

The zombie outbreak is frighteningly believable because it takes place in an environment we are all familiar with. Ever been on a packed commuter-train where you can barely move an inch let alone find a seat? Now imagine your worst nightmare and to make matters worse there’s no where to run because this high-speed KTX train is moving too fast. With humans being infected by the hundreds around the train vicinity and thousands, perhaps millions more around the rest of South Korea it doesn’t look good for them at all. The army are certainly not going to risk there own existence coming to save you in what looks like a pretty futile battle.

But not to worry. There’s a bulky, big punching working class hero sorting out this monster menace best he can with old-fashioned swings and hooks alongside our more hesitant and reserved fund manager. Actually it’s not long before he’s swinging punches as well. It’s a gallant and sentimental pairing – the working class hero is fighting to protect his heavily pregnant wife and the fund manager his young daughter. In order to survive they have to put aside class distinctions and come out swinging together. It just may be the best horror film you’ll see this year. Not the goriest, not the biggest body count (but pretty close) but perhaps the most original depiction of a horror standard.