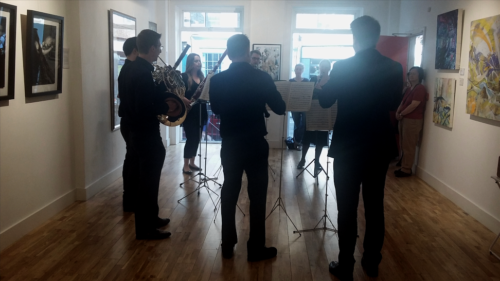 The Fitzrovia area of Central London, encompassing the City of Westminster and much of Camden, celebrated its annual Fitz Fest music festival using venues not typically associated with classical music. World renowned musicians performed Mozart’s Wind Serenade in C Minor in the Darren Baker Gallery on Charlotte Street. A pretty off-kilter venue, you’ll agree. It’s called The Rush Hour Concert for a good reason. Starting at 6.00pm it’s a timely and convenient find for the expected throng of commuters. The sound of wind instruments could be heard a few minutes after alighting at Goodge Street station so a map isn’t really needed!

Artistic director Daniel Bates is the brains behind the outfit and had them performing works by composers who have links to Fitzrovia, such as Mendelssohn, Weber and Elgar – all of whom lived in the area. Other musical groups will be involved, some of them playing historical instruments that were actually made in Fitzrovia. There will also be similar performances in parks, pubs, offices and even homes as well as other activities such as educational workshops, talks and guided walks. Oh and of course some of the galleries will be used for Fitz Fest exhibitions and not just classical concerts!

Fitz Fest is on until 11th June.