Home  /  Movies & TV Shows, Reviews  /  Fantastic Beasts and Where to Find Them (Film)

Fantastic Beasts and Where to Find Them (Film) 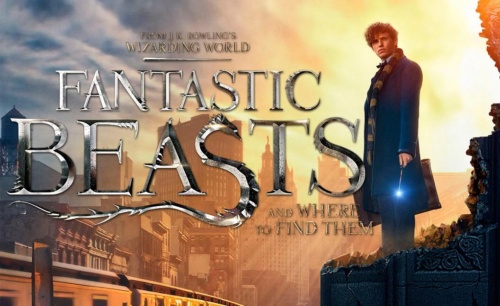 Review of: Fantastic Beasts and Where to Find Them (Film)

The first movie script to be penned by billionaire author J.K. Rowling will no doubt prove to be as successful as the Harry Potter books she wrote without the contribution of Hollywood screenwriters, because when you’re in flow you’re in flow. And the casting of Eddie Redmayne in the lead role as magizoologist (wizard & zoologist) Newt Scammander, will be instrumental in this respect. He takes the mantle as a gawky, unconventional type who in many ways is not your archetypal hero. His awkward Englishness is well played (and probably natural). Refreshing though it is, he is forever marked out like a purple fish in 1920s New York where the movie is set and adds spice to the protagonist.

His commitment to the universal principles of ‘ the good side’ though are familiar and much welcomed if you are a fan of traditional movie principles. This is particularly important in the children’s genre. Again, as regards this battle between good and evil there are moral parallels with current global concerns such as conservation as he goes on a quest to round up a number of endangered ‘fantastic beasts’ before they face extinction and harm from the wizarding community who consider them a threat. But it’s his fault anyway. If they hadn’t escaped from his Tardis-like suitcase in the first place then they wouldn’t be wrecking the city.

He teams up with Tina Goldstein (Katherine Waterston) who is at first sent to investigate him but emerges as a duty-bound sidekick, tempering his reckless wand-waving and giving direction to his zoological concerns. She’s more than a sympathetic shoulder though.Waterston’s ability to effortlessly express the full gamut of emotions on cue will not get her an Academy nod but perhaps should. When will the Oscars recognise children’s movies can also have worthy celluloid values?

There is a long list of producers and executive producers and you can see where all the work has gone. This new franchise has kept the same team in this respect: production designer Stuart Craig, executive producer David Heyman and even director David Yates have all been retained from the Harry Potter franchise and you really can’t argue with that decision. The backdrop of 1926 New York draped in the drab grey and browns of the period, soft-filtered, marginally sepia yet lifted by the wailing, swirling special effects that dog the ‘fantastical creatures’ are a cinematic symphony of excellence.

Also the costume department has to be commended for their high profile styling that is paradoxically barely noticeable –  and that’s just how costume in film should be. The long brown leather jackets and trilbies worn by the personal guard protecting President Seraphina (Carmen Ejogo) have as much movie-cool as the snazzy leather jackets and shades in The Matrix trilogy but their appreciation is absorbed by countless whirlwind developments that leave you little time to indulge. Admittedly, President Seraphina’s amazing headdress is lot harder to ignore though.

Will the kids follow the plots and sub-plots as easily as the adults? It could be argued that even some adults may struggle. But hey not all. The forces of good and evil tend to be pretty self evident regardless of how meandering and tributary the contributing developments. Our advice is never let your eyes leave the screen for a second or you may just miss the relevance of a wizardry term or new character and from then on you might be a little lost playing catch up. And you don’t want to miss the reasons Darth Vader type Percival Graves played by Colin Farrell gives way to Johnny Depp in a charming little cameo. Oops spoiler! Sort of.

This is the Christmas season movie to beat. But knowing as we do the Rowling name’s association with unabridged imagination and fantasy epics we kind of expected this. Don’t be surprised if she has a five-star run-in as the festive countdown begins.