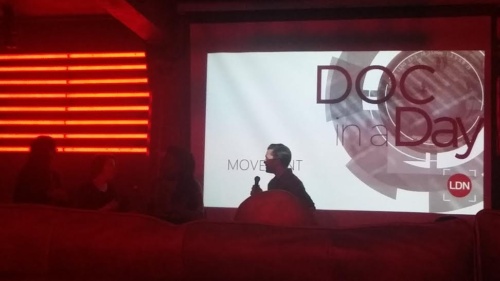 The London Documentary Network held its 4th Doc-In-A-Day competition on April 23rd with the entries judged by industry professionals at Cafe 1001, Brick Lane on May 4th. The organisation has been growing steadily so with increasing numbers of competitors and larger audiences the Brick Lane venue was the desired option. Participants are asked to meet at the BFI, Southbank and film a documentary in 36 hours. The film crew can be either complete strangers they meet on the day or they can bring their own team. The theme for this programme of films was ‘Movement’ with film-makers given the freedom to interpret this however they wished as long as it was shot, edited and submitted within the deadline.

The night began at 7.00pm with drinks and networking and by 7.30pm the screening was underway. There were four films  – Parting, Argy Bargy, The Next Move and London’s Night Rider with each two to eight minutes long. Argy Bargy included short anecdotes from London’s barging community, sharing their concerns about the privatisation of canalways and other more light-hearted experiences such as amorous couples romping on barge roofs.

After each film the crew was invited to give a Q & A about their production highs and lows. The challenge of working in raw, high tempo conditions admittedly brought the best out in them but also tested their collective will. Also in the audience cheering them on were former Doc-In-A-Day participants who now enjoyed the comfort of hindsight but looked forward to the next competition.

The London Documentary Network encourages film-making hopefuls to take on this challenge and become a part of their increasingly popular network.