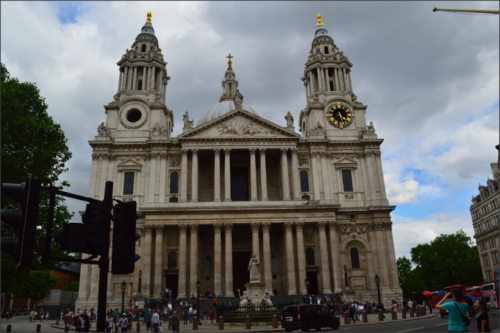 Britain’s greatest architect Sir Christopher Wren conceived of St Paul’s Cathedral in the aftermath of the Great Fire of 1666 which ravaged the capital. He drew up plans to resurrect a city which had only just recovered from the Plague, intending the cathedral as its centrepiece. Few people know that his skills were self taught and were used in constructing 52 churches in London well before his St Paul’s masterpiece.

In 1674 the burnt out remains of the old St Paul’s was knocked down and Wren oversaw the laying of the foundation stone for the new building with a great sense of ceremony that lifted a city still reeling from the memories of Fire and Plague. However, progress would be slow because of Wren’s very particular plans which sought to take construction through a number of specific stages.

The British Civil Wars of 1639-1651 which culminated in the execution of Charles I ushered in a puritanical age under Cromwell’s dictatorial rule which affected everything including architecture. However, the period of the English Restoration which saw monarchs seizing back power also augured well for Wren in this respect as he was given the freedom to design St Paul’s with Baroque touches which a Cromwell parliament would probably have frowned upon.

Today St Paul’s Cathedral’s status as one of the world’s most recognisable places of worship is unquestionable. In the UK only Westminster Abbey comes close to surpassing it as a religious landmark. Prince Charles’ wedding to Diana there in 1981 further underlining its importance and place in British history. Targeted by the Nazis during the Blitz, its dome withstood the onslaught and provided a much-needed beacon of hope against those seeking to crush the national spirit.