Home  /  Features, Shows & Exhibitions  /  DC Exhibition: Dawn of Heroes is Pulling in Crowds at the O2

DC Exhibition: Dawn of Heroes is Pulling in Crowds at the O2 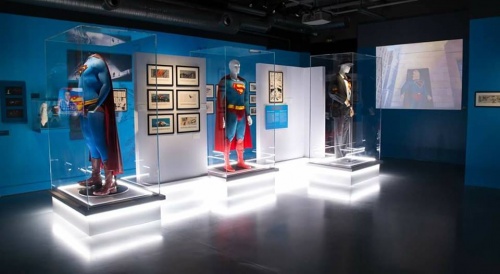 After a successful 10-month run at the Art Ludique Museum in Paris, the DC Exhibition: Dawn of Super Heroes opened in London in February at The O2 Arena. The exhibit is a culmination of DC’s colourful history and iconic superheroes. It will run until Sept. 7, 2018, which means there is plenty of time for comic fans to visit. That includes us here at What’s Hot London? and we even said how much we enjoyed the Wonder Woman movie.

The exhibition showcases around 200 original comic pages of DC’s superheroes and supervillains like Batman, Superman, Wonder Woman, and The Joker, as well as iconic scenes and landmarks. Many of these works come from renowned comic artists such as Bob Kane, Jim Lee, Neal Adams, Frank Miller, and Alex Ross among others.

Additionally, it features 300 preparatory concept artworks for cinema, and houses a wide selection of authentic costumes, models, and props used in DC films. The Standard reported that the exhibition’s curators were given full access to the Warner archive. You can see stuff from the 1989 to 1999 Batman franchise directed by Tim Burton and Joel Shumacher, the critically acclaimed Dark Knight trilogy by Christopher Nolan and the films that now comprise the DC Extended Universe (DCEU): Man of Steel, Batman v Superman: Dawn of Justice, Wonder Woman and Justice League.

Curator Jean-Jacques Launier shared, “People have loved discovering the history behind these characters and the influence they had on culture.” Indeed, the DC comics franchise has had a huge impact on Britain, as you can tell how popular these superheroes are by the mere number of superhero-themed conventions held every year. The List even recommends 10 of the best conventions in the UK including MCM Comic Con, International Comic Expo, and the Swindon Film and Comic Con.

Comics in general have deep roots in the UK. The 1930s saw the rise of British comics like The Beano and The Dandy by DC Thomson. It was these local titles that reigned all throughout the 1970s, before the introduction of Marvel and DC comics. After they arrived, the UK quickly embraced the concept of superheroes. In fact, Marvel UK even created localised versions of their poster heroes. For example, Captain America became Captain Britain. The rest, as they say, is history.

Now, thanks to the blockbuster film hits from Marvel Studios and DC/Warner Bros., the superhero craze is rampant in the UK. Superhero-themed goods are selling like hot cakes, and various industries are adopting superhero assets. While physical stores like Forbidden Planet and 30th Century Comics are the go-to places for comics and graphic novels, people also have numerous online sources for their superhero fix.

Geek online clothing stores have popped up all across the UK, such as Inner Hero and 8Ball. Both are dedicated to producing merchandise based on pop culture icons. This is the same case with developers that create engaging virtual content. Game portal Foxy Bingo features a host of superhero themed online titles and the spotlight is often shone on DC and Marvel inspired games. The game Amazon Queen for one, is easily distinguishable as having similarities with the famous Amazon Princess of DC. With such a wide reach, there’s no doubt that the superhero phenomenon perpetuated by the likes of DC has a long way to go before it dies out.

If you’re a DC fan, you should definitely give the exhibition a visit before it closing in September.