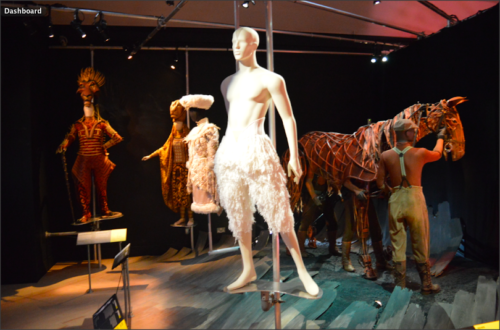 Review of: Curtain Up (Exhibition)

Britain’s theatre sector is seemingly one of the few areas of the economy unaffected by Brexit – and actually thriving on the influx of tourists capitalising on a falling pound so this exhibition at the V&A is pretty timely. London and New York are the undoubted emphasis. The West End’s Theatreland has always topped the world’s rankings, even ahead of New York’s Broadway so it’s importance is not to be underestimated. These comparisons between the two are actually discussed there on film with producers Hal Luftig, Daryl Roth and Caro Newling chipping in.

As you enter the front gallery there is a working model of Joey the puppet from Warhorse. You are informed that this particular model created by Handspring Puppet Company and scenic designer Rae Smith was used in 1,640 productions up until 2013. Alongside it is Scar’s mask from the Lion King (1999). There were actually two masks in the production – one fixed the other able to convey a wider range of facial expressions.

Costumes on display from classic productions include Judi Dench’s regal and elegant sari silk dress from the final scene of Anthony and Cleopatra and Rudolph Nureyev’s emblemmed green and gold tunic from the Romeo and Juliet ballet for London Festival Ballet. The male swans from a more contemporary Swan Lake are dressed in white feathered breeches with their bared torsos representing masculinity. This is a notable gender departure by British choreographer Matthew Bourne since the swans in this play were traditionally female.

Sir Laurence Olivier is a name immediately associated with theatre and certainly set an exemplary standard in the UK. Along with the numerous awards he received throughout his career, the Society of West End Theatre Awards were renamed the Olivier Awards in his honour. These bronze statuettes were even designed with his likeness as Henry V at the Old Vic. Obviously, considering his standing, these achievements are well-represented with a replica Olivier award one of the  centrepieces in the exhibition and coinciding with the statuette’s 40th anniversary.

Curtain Up: Celebrating 40 Years of Theatre in London and New York runs till Aug 31 at the V & A.