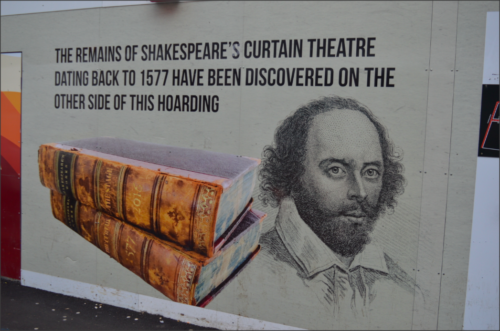 Curtain Road in Shoreditch has its place in British history as the location for Britain’s earliest theatres. In 1576 the first purpose-built modern playhouse was constructed on this road and given the succinct title of The Theatre. Nice name! It comes from the Latin term Theatrum used to describe a Roman playhouse and was the brainchild of celebrated Elizabethan actor James Burbage who lived just off Curtain Rd on Holywell Lane. Our photos show his own street now covered in graffiti and murals from Shoreditch’s ‘celebrated’ street artists. Also on another road leading off of Curtain Road is The Curtain Theatre. It was discovered in 2012 during an archaeological dig on Hewett Road. It was built in 1577, a year after Britain’s first theatre had been established. Shakespeare performed most of his plays here when The Theatre was closed down in 1596. Our photos also show workmen hanging around the deserted, debris-strewn excavation site.