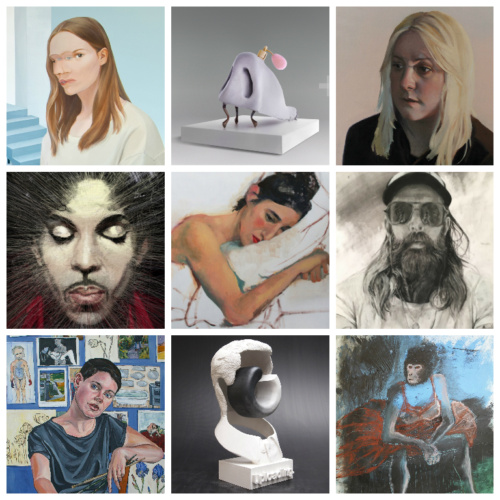 An open invitation for portrait artists from all fields drew work that varied from life-like oil depictions to sculptures of bog-rolls wearing judge’s wigs. Celebrity culture was well represented with paintings of Prince, Jay Zee and Rita Ora – the R&B singer fast becoming the preferred celebrity muse for contemporary artists and poets in place of former supermodel Kate Moss.

The artistic approaches varied from the classic Greco-Roman depiction of Alexander The Great by Marcus Sprigens to the politically-charged surrealism of Yemi Tuba. Tuba’s Dali-influenced Violin Player sits mischievously under Sprigens’ Alexander; indicators of the breadth of talent on show. Sprigen’s red-robed Christ in the likeness of the Robert Powell characterisation bears both the agony of the cross and the blood of his sacrifice in the weathered yet mystically translucent colour of his attire.

If the scrawled, faux-naive expressionism of artist Soma seems a little familiar, he does little to cover up his influences. His A4-sized oil pastel on paper exhibits are surreptitiously small but still stand out in the furthest corner of the gallery. Pastiche? Certainly, a definite take on the style of African-American graffiti-expressionist Jean-Michel Basquiat. Even the artist’s name is a take on the master. Basquiat’s graffiti tag before he became famous was Samo (it’s an abbreviation for Same Old Shit) and he continued to use this as his signature even once he broke through. Instead, at this Candid Gallery exhibition we have Soma. The abbreviation’s meaning could almost apply here as well if it were not for Soma’s self-deprecating, ironic aesthetic.

A similar faux-expressionist style is evident in Zarina Belic’s triptych of Judgemental, Intoxicated, and Self Portrait, but her jarring, primary coloured work lights up the gallery purely because it stands out amongst the more standard styles around. These acrylic pieces look like they’ve been daubed onto the canvas by an angry child but resonate deep in the subconscious with the same abandon that created them.

Sam Burke’s monolithic portrait of Nigel Farage holding a pint of beer may have you heading for the gallery door until, with patience, you accept that not only is it one of the largest paintings in the exhibition but also one of the most eye-catching for other reasons. The craftsmanship is faultless – in fact too lifelike for comfort. It has a pretty apt title as well, at least in the eyes of many who dislike his brand of political diatribe, – ‘Froth’.