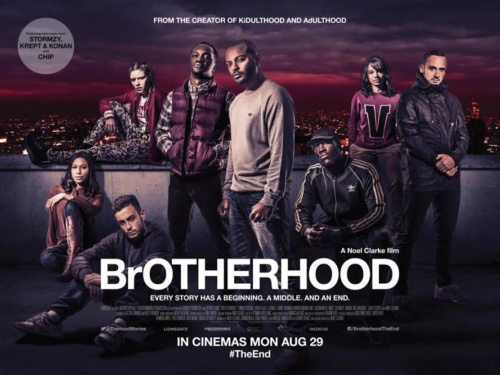 Writer/director Noel Clarke’s latest instalment in his urban ‘hood’ trilogy has him again in the lead role as Sam Peel but this time – as his paunch in a gym mirror shows – age brings with it both undesired physical changes and also much required emotional maturity. That is until the latter is severely tested by an old enemy. From the opening scenes you can sense that Sam has become a family man devoted to his lawyer girlfriend Kayla, played by Shanika Warren-Markland, and his two children. He has even patched things up with Alisa (Red Madrell ) whose boyfriend he killed in a vengeful street brawl in the first movie Kidulthood.

An Essex-based criminal fraternity who are muscling in on the area come looking for Sam until it is he who is forced to come looking for them after they find out his address and issue a series of threats about his family’s welfare. Jason Maza and Leeshon Alexander play the lead villains with comfortable menace but these criminal characters lack that killer touch and you never quite feel threatened by them even at their worst. Gang chief Daley’s slightly jokey nature is there to add a comic touch but that actually plays against the aura of fear even more. A Dave Courtenay-type mobster  making the same jokes would have chilled to the bone.

Peel’s nemesis Curtis (Cornell John) though does generate that cold shiver down the spine. He still hasn’t forgiven Sam for his nephew’s murder and has recruited the help of these Essex villains who are knee deep in sex trafficking and other dodgy goings on. Daley and Melvin ‘Hugs’ Levin  surround themselves with teenage street thug types who seem out of place amongst the mansion status of the major villains. The casting in the previous films Kidulthood and Adulthood was a lot more natural in this respect, although Drew (Jake McMullen) is believable as a mouthy, ruthless young hood looking to impress and willing to fire a gun at the slightest provocation. When the film opens with him doing just that and injuring Sam’s brother you know this film isn’t going to have a happy ending.

Henry (Arnold Oceng) is the constant scene stealer with a more effective comical air as he tries to avoid being roped into Sam’s plans to protect and avenge his family. Whenever he is on the phone with Sam and Henry’s girlfriend asks who he is chatting to (suspecting it is another woman) there is a running joke about a Tesco club card that punctuates the viciousness of the movie with some humour. Oceng stands out for his versatility and ability to play a human being with other sides to his character, tormented as he is between the choice of staying away from trouble and acting as a getaway driver for Sam.

All-in-all the film will have you glued to your seats yet doesn’t have the rhythm and believability of the previous flicks, Kidulthood and Adulthood. In both of those the viewer suspended their imagination because it made you believe you really were there with them on the streets. Brotherhood has elements you find hard to reconcile and therefore always feels like imagination and entertainment – slightly jazzed up violent entertainment. There are one or two moral lessons chucked in and grime rapper Stormzy’s thug character is nodded onto the straight and narrow after a chat with Henry (while he has a hammer held at his head). You get the impression that some of this, including the moral finger, seems forced rather than flowing effortlessly with the plot line.