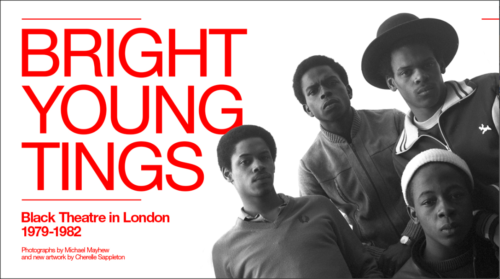 This photographic exhibition at the National Theatre, South Bank covers the 1979-1982 period when the UK’s black theatre was seeking a distinct voice from the African-American productions that dominated in the decades preceding. The archive of 35mm black and white rehearsal photos are the work of Michael Mayhew whose account of the period and his own background in graphic design are also available as pre-recorded interactive audio material.

While still artistic director of the National Theatre, Mayhew was commissioned for these publicity shots by British director Charlie Hanson and Trinidadian playwright Mustapha Matura. Together they had formed the Black Theatre Co-operative to provide opportunities for ethnic minority theatre practitioners who were marginalised by London’s fringe theatres.

Matura worked as a hospital porter in London when he first landed on these shores in 1962. A decade later his Royal Court production Play Mas had won the Evening Standard ‘Most Promising Playwright Award.’ The creation of the co-operative in 1979 built on this momentum.

Joan Ann Maynard became its artistic director in 1995 and you can hear her recollections of the period through the interactive headsets. She recalls the lack of a Black British voice in theatre in the 1980s and also feeling slightly outside the male-dominated atmosphere at the co-op. The realities of trying to make a black theatre brand commercially and creatively viable include the lows of performing to a handful of people.

The recognisable faces in the photos include a youthful Vaz Blackwood and Victor Romero Evans in the Mustapha Matura-penned One Rule (1981). Also an atmospheric, heavily silhouetted snap of Don Warrington in his early twenties looking hopeful and contemplative – the personification of a Bright Young Ting.