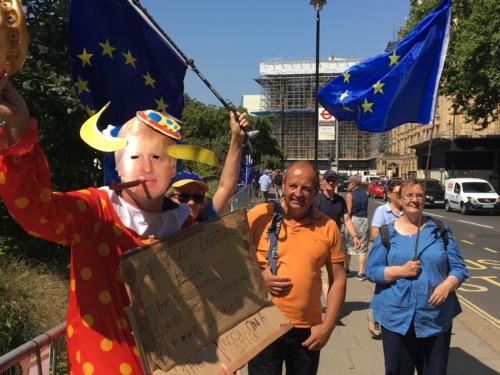 Britain has a new PM, but will Boris unite a country divided by Brexit and calm factional in-fighting within his own party, or will the nation give their unelected leader, who many label a buffoon, the thumbs down?

Whatever the arguments of his haters and supporters, it has to be agreed he is a charismatic politician with powerful, energising public speaking skills, ideal for galvanising the country at this time. However, it has also been argued that he pinched a lot of this rhetoric from his hero Winston Churchill and is no match for Churchill’s attention to detail and political nous, which accompanied his celebrated oratory skills. Boris takes over at a critical point in our history and faces a uniquely turbulent political environment. Not exactly the world war threat that loomed over Churchill, but will similarly test Johnson during his tenure. Circumstance often forges the character and destiny of leaders even where they are found lacking and even unsuitable as they take office.

Notably, he had a recent conversation with Churchill’s grandson Sir Nicholas Soames, who was well aware of Boris’ desire to follow Churchill to No.10 and tersely advised him to “Not bugger it up”. Soames admits he couldn’t vote for Boris but was referring to his concerns for the future of the nation – not necessarily about Boris’ suitability for the post. However, both concerns are inevitably tied. Winston Churchill and Johnson were similar in that they were both journalists-turned-politicians called to the highest position in the land at the nation’s darkest hour. At this point, the similarities end: therefore Soames’ comment on all this political ambition was apt in its brevity. 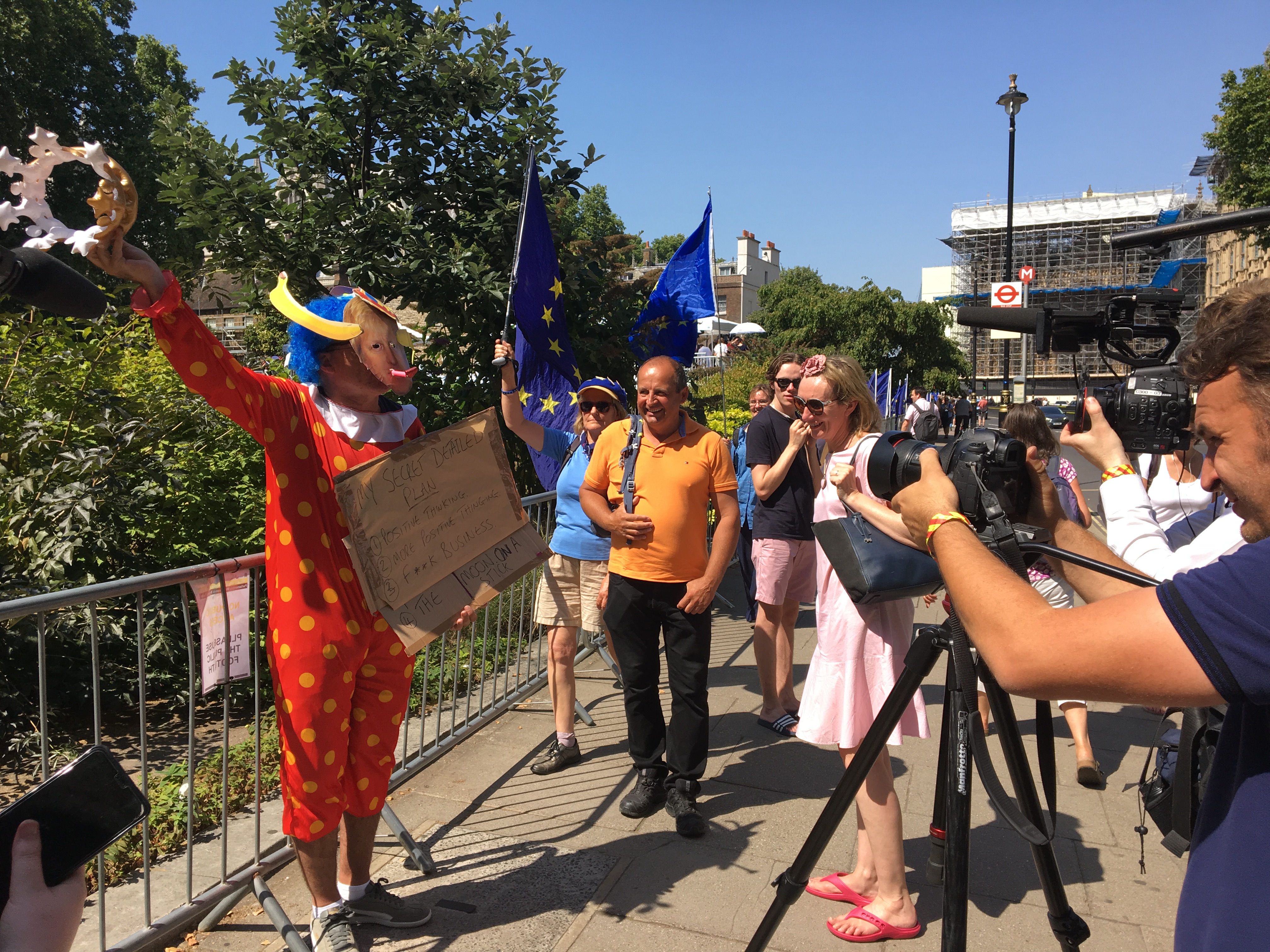 Johnson has made no secret of the fact he was always after the top job. Asked a few years ago whether he wanted to be PM, he answered: “It’s a very tough job being prime minister. If the ball came loose from the back of a scrum…it would be a great thing to have a crack at.” Interesting comparison. Everyone remembers that viral Youtube clip of the then mayor of London clattering into a 10-year-old child on the opposition side during a playful rugby match in Japan.

It was obviously an accident but, arguably, fuelled at some unconscious level by his own unbridled ambition. According to his sister Rachel Johnson: “He knows that life is a competition and always wants to be on top.” With all this political ambition there are concerns that no one knows the real Boris only the bumbling, witty, Latin-spouting character who seems comfortable jostling for votes at any cost.

Boris has been previously quoted as saying he is in favour of the single European market and now stands proudly at the vanguard of the Leave camp and was the political star at the heart of the referendum result. The mutterings of ‘populism’ and ‘integrity’ grew louder but Boris has ample opportunity to show this was not political jostling but heartfelt pragmatism. Also, now he’s PM we have to stop calling him Boris! He’s the only politician referred to by his first name – a sure sign that the whole country has bought into his popularity.

What do Londoners think? Editor, Eddie Saint-Jean speaks to them openly about their hopes and fears on how Boris will handle Brexit.

Scottish-born Rebecca Morrison has a regular one-woman Remain protest outside Parliament. She’s there from 11am to 5pm and isn’t phased by the scorching sun. She moved to Berlin after the referendum result (but points out she wasn’t turning her back on Britain) and takes a train over to London once a month for her protest. Her banners and posters mention Churchill’s comments after WW2 on why it’s important to be part of a European family.

On the new PM: “What an incredibly difficult position for anyone. I’m not enthralled about the likes of Jacob Rees-Mogg and Ian Duncan-Smith having important positions within government, which they inevitably will. I fear the language of division, it is not the language of general people and the workers. We have to regard this with some degree of pessimism. I want to remain an optimist but anything that gives more power to populism is very dangerous. I think Boris might surprise us all rather soon with some no-deal concessions”. 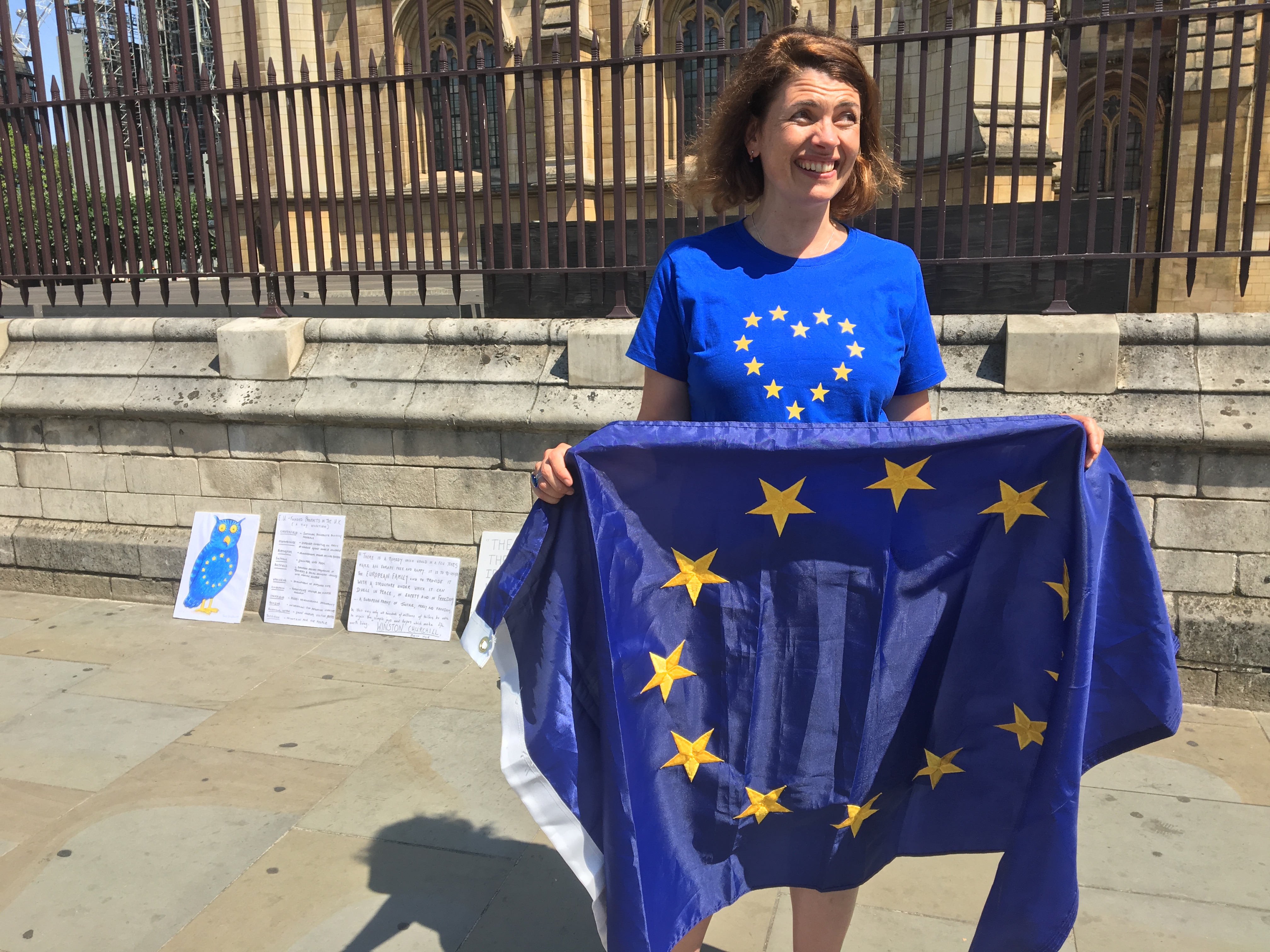 Remainer Becky Morrison outside Parliament as the Tory leadership results are revealed.

Thomas Oehrling is a Remainer studying computer science at Goldsmiths University of London. He is part of the Sodem movement, a pro-European group that is calling for a second referendum or revoking Article 50.

“Boris Johnson is a very divisive Leave figure but I don’t think he will help Brexiteers get a no deal because I don’t think Parliament will support it. However, Jo Swinson recently got elected leader of the Lib Dems so it’s possibly the start of a very strong pro-European movement because they’re leading in some of the opinion polls. So who knows what will happen when she lays out her platform for the future?”

Jeff (below) is a Remainer from South-West London.

“Boris, he’s been working his way to this, hasn’t he? I don’t think he intended to win the referendum but he intended to be PM by any means necessary. He was quite supportive of being in Europe in 2016 yet here we stand today. He’s succeeded in his personal aim but he’s ripped the country apart in order to get where he wants. So his job’s fine but for hundreds and thousands of others I don’t think it’s so good.” 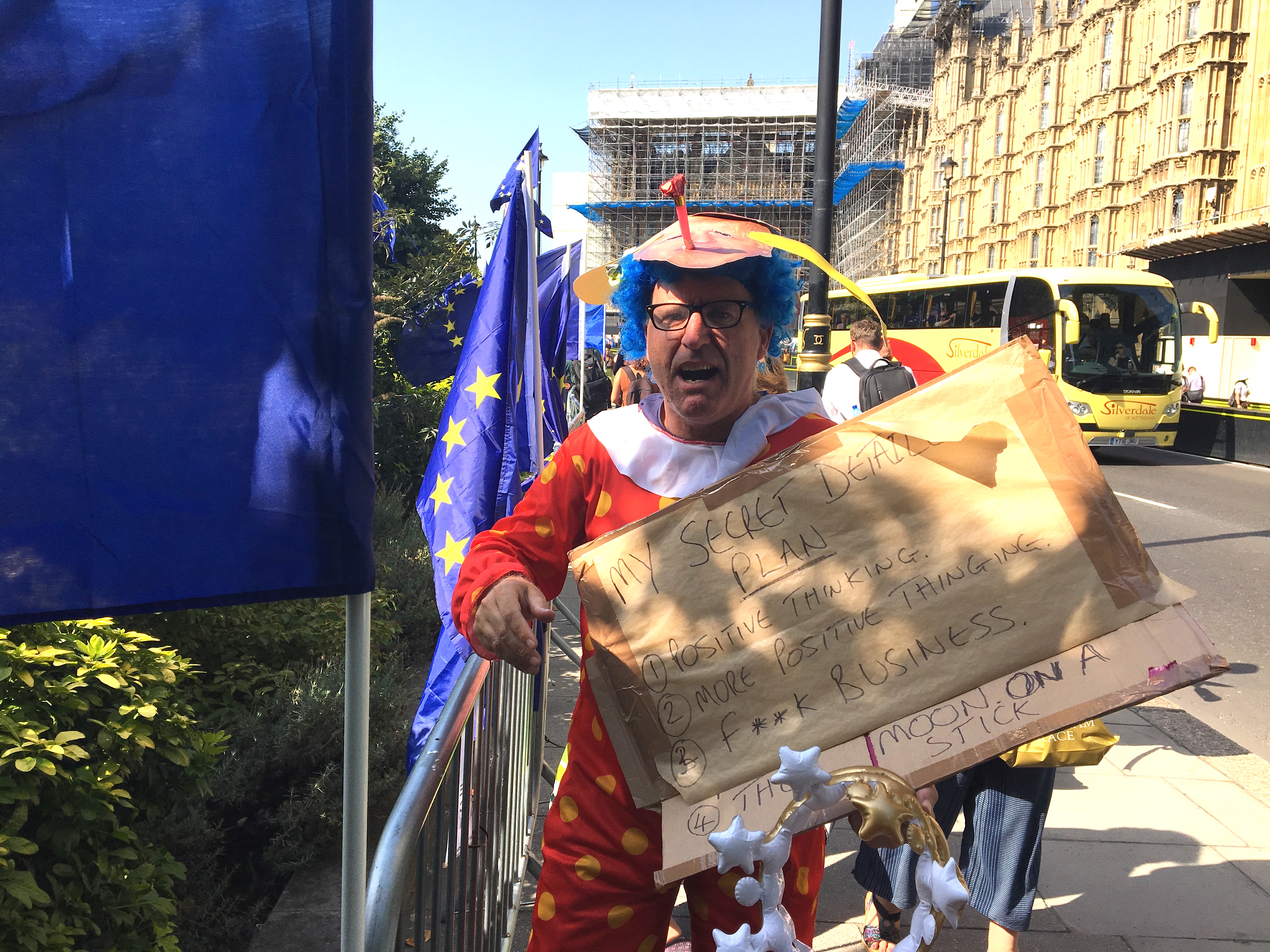 Sam 28, (below) is a Leaver from London, who works as a self-employed driver and courier recruiter.

“At university I became a Eurosceptic. My parents were Conservatives and they were also Eurosceptics when I was growing up. When I was at university a family member started showing me videos of Nigel Farage and Ukip at the European Parliament and that’s where my political stance on Europe came from. When there was a referendum I was happy that David Cameron said there’d be no going back on the final result. We need someone who is going to take us out, deal or no deal, on Oct 31st and hopefully Boris is the man to do that.” 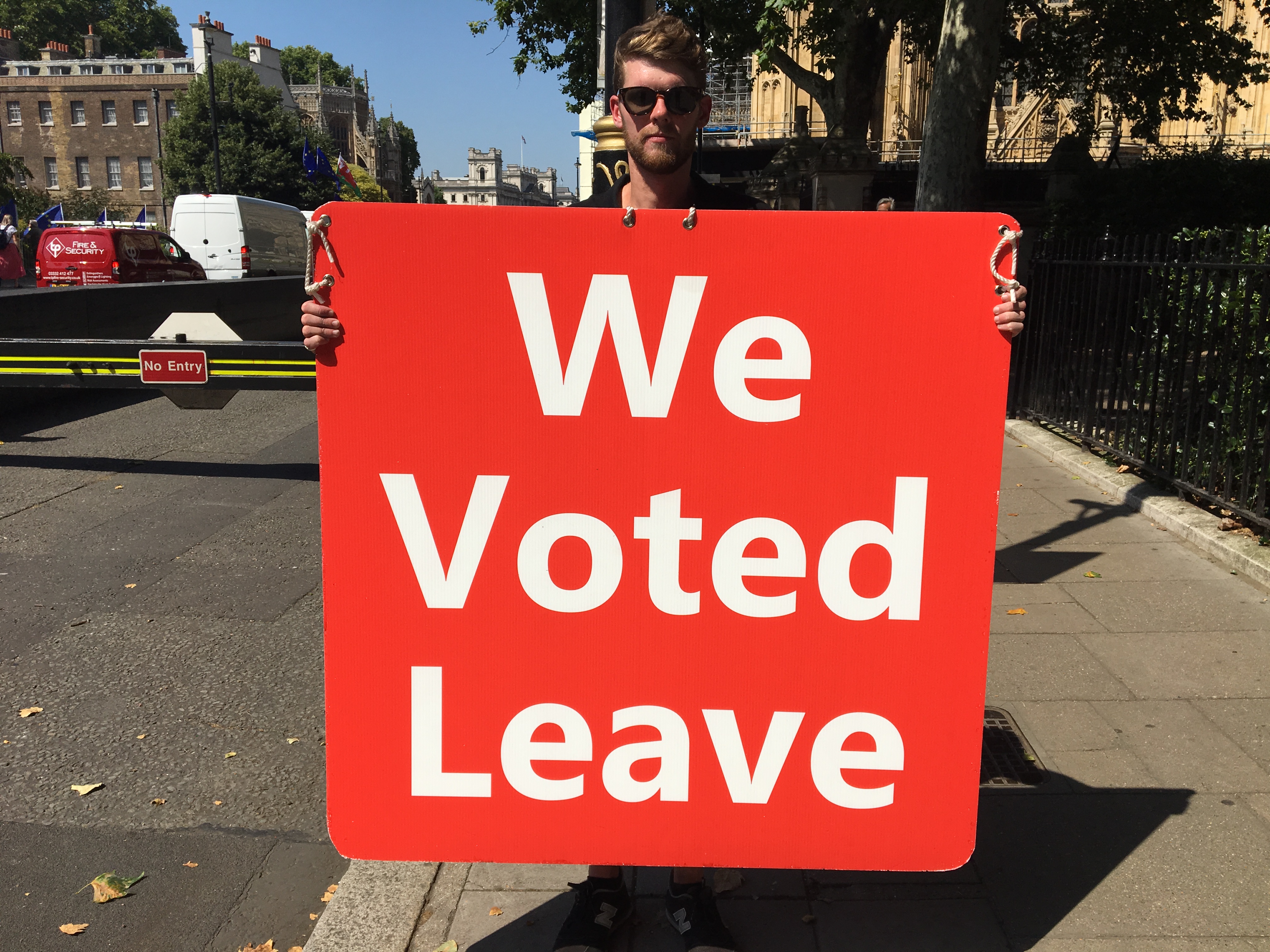 Sam, 28, believes in Boris and hopes he follows through on his Brexit pledge.

Kim 50, is a Leaver from Hampshire.