Books on the Underground 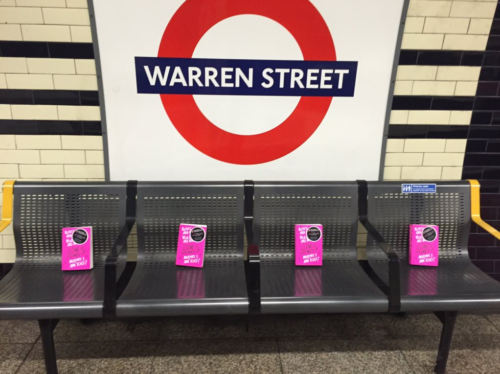 During your morning commute you may have noticed a strategically placed novel on London Underground. Perhaps already waiting there on your seat causing you to hastily discard your copy of The Metro. Well if you have, it may be the work of a dedicated book-loving organisation called Books on the Underground.

Created in 2012 by Hollie Fraser, quite simply they drop books all over the Tube to encourage us grumpy-demeanoured travellers to put away our mobile phones and tablets and embrace a new world of talented and often unsung writers. And to this end they are served by a dedicated team of Book Fairies responsible for these book drops.

And it’s not just one or two here and there. Around 150 books a week are involved and range from used titles to the latest novels from upcoming authors. Publishers often engage The Book Fairies in guerilla-style book promoting campaigns which cut through the formulaic and often stale marketing methods more commonly used.

Social media is the key here to connecting with the public in a novel way (forgive the pun). People are encouraged to tweet the hiding places of the books to build up a wave of internet chatter. They’re also encouraged to put the books back on the Tube after reading them to give others a chance to share in these undiscovered gems.

Actress Emma Watson is a fan and apparently has also become a Book Fairy, recently hiding copies of Maya Angelou’s Mom & Me & Mom on the London Underground and the New York subway. And talking of the USA, founder Hollie Belton has relocated to the Big Apple to set up Books on the Subway, leaving London Underground’s Book Fairies in the capable hands of Cordelia Oxley.

And if you’re out and about on the Tube today look out for copies of My Sweet Revenge by award-winning television producer turned author Jane Fallon. She has signed ten copies, one of which has a special surprise. And it just might be your lucky day!