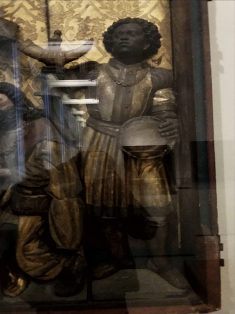 Review of: The Adoration of the Magi

It’s easy to become distracted at the V&A. It’s not everyday you have Leonardo da Vinci’s handwritten notebooks within eyeshot, competing with the sensual overload of countless other glorious artefacts and paintings spanning centuries. Within this glory, understated and enlightening, lies the history of the black experience in the medieval and renaissance period. Understated because it is only with research that you realise that the predominant visual representation of blacks as servants and attendants is only half the story.

Augustin Henckel’s Adoration of the Magi (1500-20) depicts the Three Kings visiting the infant Christ in Bethlehem. This lime wood gilded altarpiece was discovered in 1848 in a Swiss monastery but earlier estimates indicate it came from Henckel’s shop in Schaffhausen, Germany as it bears many of his working trademarks. The panel is all that remains of the original. The Three Kings are barely sheltered by the broken down manger with its damaged straw roof but the pervading atmosphere of awe and humility along with Henckel’s seamless pronunciations of regal gold and workmanlike lime wood add a reverent quality. The broken roof symbolises Christ’s spiritual mission to sweep away the broken down old order so its material condition does not matter.

Standing furthest right is King Melchior, black-skinned, beardless, wearing a gold earring and chain. Nicholas Poussin’s 1633 painting of the same name has him dressed down in simple tunics and no jewellery. Others show him as a turbanned figure in flamboyant robes because of the African reference from the Moors of the period but here he is a noble and sword-bearing representation of youth alongside the two bearded senior citizens, Balthazar closest to him and Casper on the far left balding and kneeling. To many this is a reference to the three ages of man, youth, middle age and old age.

There is some discrepancy as to whether the Three Kings in these paintings are based on tradition or the actual text in the Gospel of Matthew. There is no mention in Matthew of racial background or even number so their later evolution as symbolic Kings of Europe, Asia and Africa is an interesting one. In the bible they are merely referred to as Kings of the East. During the late 11th century Henckel’s birth nation was the first to present one of the the Three Kings as black and also to identify him as Balthasar – in Hans Multscher’s Wings of the Wurzach altarpiece (1437).

Notably, popular tradition recognises the black king as Balthasar but Henckel’s altarpiece identifies him as Melchior by the initials MELCH on his left arm. Just to make things even more confusing the Czech Republic has also laid claim to the first depiction of a black king in a 1360 wall painting found in an Emmaus monastery, although he was not yet given the name Balthasar or Melchior. Whatever the European origin the growth of the slave trade in the 1500s and greater contact with Africa helped establish the black Magus/King throughout Christendom.

The Adoration of the Magi is on display at the V&A museum. Admission to the museum is free and is open daily 10.00  to 17.45 hours.