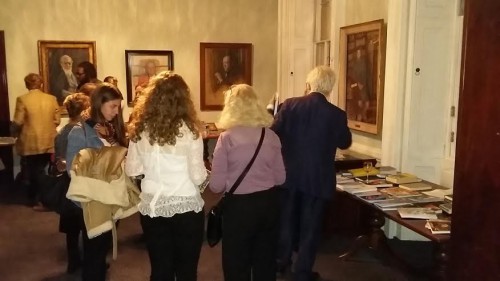 If you find the idea of a novel combining African story-telling and Gaelic lore intriguing then you’ll be intrigued by Ruth Finnegan’s latest work Black Inked Pearl. If you also hear it was written from the author’s actual dreams and taken straight from the subconscious unedited, then attending the book launch is a no-brainer. The Irish-born academic and anthropologist graduated from Oxford University in the Classics and this along with her doctorate in anthropology lays the foundations for her linguistic style. Finnegan’s previous books are mainly academic and certainly contributory. Her field study book Oral History in Africa emerged from research into storytelling in Sierra Leone amongst the Limba tribe. Her current novel embraces this style and shatters the structures of traditional storytelling.

The novel’s central character Irish teenager Kate begins a Homeric journey to find a lost love after first rejecting him as a fifteen year old. But it’s not just a simple love story – far from it. More a free-flowing, ambiguous narrative that starts in Donegal and continues into the African continent. The reader’s task is to free themselves from the shackles of sentence-paragraph-chapter progression and swim with the flow of the text. Swim is a good word because most of the narrative reads like poetry. At once descriptive and sensory but nebulous in form. The recollections of rural Ireland will meander in and out of Greek mythology conjuring up character references such as Alcestis but lovers Diarmuid and Grainne from ancient Celtic lore are never far off. All of these essential elements in understanding the main character.

There’s a scene where Kate’s memories at convent school are so awash with word play you forget you are in class with her until the nuns begin to frown. What’s most important is what goes on in her head and not the classroom itself, namely, Kate’s love of literature and the classics. Consuming all else, the power of the written or spoken word: “And were not Milton and Wordsworth crammed with allusions and parallels, Or who could new-compose Pope’s poems or Coleridge or Milton either, and not draw on their words?” and “Did not Renaissance arts or Greek or African recycle other texts? Shakespeare too and Bible, yes – of that the nuns spoke not.” It’s all pretty deep as we are shown early on she is not an ordinary fifteen year old dreaming of teenage boyfriends and thumbing through her mobile phone (well teenage boyfriend yes!)

Kate and that jilted boyfriend meet up again at St Pancras Station seven years after that parting on the Donegal shores. As in a dream, time does not have a logical, linear progression because they are suddenly a middle-aged couple in their forties. Still in the restaurant. Same reunion. Or are they? Because the references to ‘seven years ago’ re-emerge. Kate even questions the content of her own conversation, doing a double-take on sentences because of the elusive, transitory, formless nature of dreams. She even reads the thoughts of a waiter as if she is his narrator because in the subconscious all things are possible. No doubt you want to find out what happens now she has finally tracked down this lost love. I suggest you read the book.

It has received rave reviews and was recently given a 5 star review from Readersfavourite.com. You can see why because it is a unique piece of work in every sense of the word. Poet Samuel Taylor-Coleridge wrote his poem Kubla Khan straight from a dream but Finnegan’s book to me is a truer account of the dream state or the attempt to capture one. Nothing is made easy for the lazy reader here so get your thinking cap on and then you’ll enjoy it. Literature that has comparisons with the epic Kubla Khan and dares to merge African and Irish styles is worth the read. Verdict? Pretty close to genius. And if I might imitate Finnegan’s narrative style of using brackets to show sentences from the dream state (close enough).