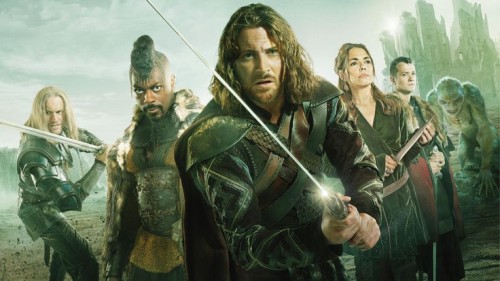 In a week where black actors were snubbed at the Oscars and actor Idris Elba addressed MPs over the lack of diversity on television, two black British actors stole the show in ITV’s £17million TV series Beowulf. Strangely enough, the drama is based on an Anglo-Saxon poem written in 700 AD when black numbers in England were a lot less than they are now. A mythological piece about a warrior’s battle with fantastical beasts and filmed in the heartlands of the rural North-East, it is one of the oldest such texts and currently involved in a Sunday evening duel of literature with BBC’s War and Peace. One of the oldest (Beowulf) versus one of the longest (War and Peace) in an epic battle of the battles.

We pick up in Episode 3 with the Anglo-Saxon stronghold Mead Hall in turmoil because of a recent betrayal. Beowulf (Kieran Bew), appointed by Hrothgar the King of the Danes to protect the Mead is now serving under the authority of Rheda (Joanne Whalley) who is vying to become the settlement’s permanent leader. Beowulf’s skills as a warrior and her status as potential chief are challenged when one of her trusted settlers is accused of colluding with shape-shifting trolls. Two warriors from the camp Thane Scorann (David Harewood) and Slean are kidnapped so Beowulf gives chase accompanied by Rate (David Ajala) the Thane of Varni.

The production values are high with the lavish, seemingly golden interior of Mead Hall constructed with no expenses spared (for what is essentially a glorified Anglo-Saxon mud hut) and the sword-rattling action through the English countryside and run-ins with the Warig creatures inspiring when they happen. (For Warigs think Star Wars Tusken Raiders without the camels and sounding like Ewoks). The special effects for all the mythological beasts are convincing but not worth ITV’s warning about scenes of graphic horror before the series starts. Although there are episodic considerations to take into account the action was too few and far between. The trolls should have been engaged in battle much more beyond the odd snarl and hiss. You could almost hear the series crying out for it.

However, the dialogue holds well and there’s a touching scene at the end when Beowulf catches up with his kidnapped companions. In the melee of combat Scorann dies in the arms of Rate, addressing him as his brother and fulfilling his destiny as a warrior, Harewood and Ajala giving the episode ‘theatrical’ closure in the best sense of the word. Stirring and epic you could well see this on stage with all the same actors. Poem as TV drama as theatre, well there’s an interesting thought.

Beowulf is a 13 episode drama series and airs on ITV  Sundays 7:00pm