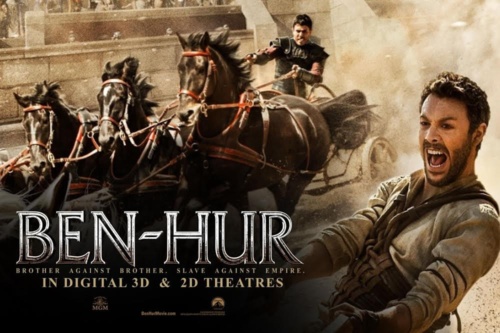 Who says you should leave remakes of epic films well alone? Charlton Heston’s 1959 version was a plucky remake itself of the original 1925 silent movie directed by Fred Nibo. No doubt that pre-talkie flick was a classic to those movie-goers around at the time as well. Yes, Ben Hur 2016 style  has a lot to live up to but surprisingly enough does so despite the even pluckier reworking of the 1950s script and fears about Heston’s superstar shadow looming large.

The criticism thrown at most contemporary actors is they lack the big screen charisma of heavyweights such as Elizabeth Taylor, Richard Burton and Heston himself when it comes to convincing us they are the grand personas they are seeking to portray – particularly in biblical classics such as this. Recent Sword and Sandal flops such as Oliver Stone’s Alexander the Great are perfect examples of cinematic style over acting substance. However, Jack Huston is comfortable in his acting skin as wealthy Palestinian Jew Judah Ben-Hur alongside actor Toby Kebbell, who is less so but strangely enough no less convincing as best pal Roman commander Messala.

The two pals inevitably fall out when Roman incursion on Jerusalem pushes loyalties to the point of bitter hatred and Judah is accused of harbouring a Jewish zealot who kills a Roman soldier. Messala has Judah imprisoned as a galley slave and his family are later feared dead at the hand of his captives. Judah vows vengeance. His eventual escape from the ship is a notable departure from the 1950s version. Without giving away too many spoilers, the Charlton Heston version had Judah portrayed as something more than a mere fugitive. In that one he enjoyed much more protection under Rome even after this fall from favour.

Here it is wealthy chariot owner Ilderim (Morgan Freeman) who offers Judah protection and shelter – not to mention wise counsel. No doubt cast to give the movie its James Earl Jones style authority-toned gravitas and to allay fears regarding big screen charisma, the dreadlocked Freeman is as wise and worldly as we have come to expect him to be, whether when placing big bets on his chariot-racing white stallions or stumbling upon galley slaves such as Judah washed ashore in his encampment. And don’t buy into the over-nostalgic film critics who won’t give screenwriters Keith Clarke and John Ridley the time of day for their artistic licence here in changing the sub-plot regarding how Judah became a charioteer. If you haven’t seen the first version, you won’t even notice what all the fuss is about.

The chariot action in the Roman arena does not disappoint, and one expects it to, no matter how low you set your sights. Did someone mention Charlton Heston again? You’re best advised to get Mr Heston out of your head before watching this movie! And with that recovered head space marvel instead at the hair-raising chariot duels, where many lives are lost in the name of sporting glory. Hold onto your seats as the upturned charioteers come screaming and flailing at the screen. Clutch your popcorn for dear life as Messala puts his on the line in a death-defying last ditch attempt to stop Judah crossing the line first. The production designers, stunt coordinators etc were up against the impossible here and gave Mr Impossible a bloody nose. Comparisons with the recent middleweight dust-up between boxers Gennady Golovkin and Kell Brook are particularly relevant when you consider the David & Goliath expectations. Yes Golovkin won in the end but as with this movie – ‘What an all-round spectacle!’