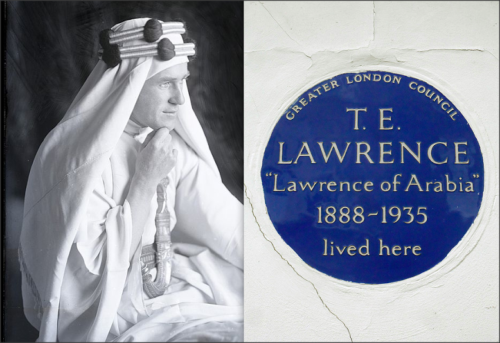 British military officer and diplomat Thomas Edward Lawrence was the real life dashing Lawrence of Arabia immortalised by David Lean’s 1962 movie, with the steely blue eyes of Peter O’Toole in his likeness. The film won nine Oscars and catapulted O’Toole into global fame as an actor with an epic resume but there are still some people unaware that Lawrence ever existed and even more who believe that the lines between fact and fiction are somewhat blurred.

Born in Tremadog Wales in 1888, the son of an Anglo-Irish baronet and a Scottish governess, aside from a few documentaries and biographies the only remaining footnote to his feats in the East is the blue heritage plaque on the walls of his former home on 14 Barton Street, Westminster. Before WW1 he was a humble archaeologist but as conflict broke out he was stationed as an intelligence officer in Arabia. He later joined the British forces in rebel led advances against the Ottoman army, seizing the Syrian capital Damascus in 1918. He rose rapidly through the ranks becoming a British army captain in Jerusalem and funding a Palestinian revolt against the Turks.

In post-war years he remained in the mix of it, this time as a diplomat acting as a go between with rebel leader Emir Faisal. By 1935 he had served in both the air force and the army and also begun the autobiography of his Arab revolt escapades – Seven Pillars of Wisdom. American journalist and broadcaster Lowel Thomas was responsible for Lawrence’s star status even more than his publication.

While serving as a war correspondent under the invitation of the British Foreign Office he became captivated by Lawrence’s arab lifestyle and culture change, so fired up by this media angle he made it the basis for an exhibition and series of lectures commissioned by the British monarchy and  attended by high society in London. This included his documentary film With Allenby in Palestine and Lawrence in Arabia which made Lawrence a household name, war hero and romantic figure. The film grossed $1.5 million and was screened to four million people globally.