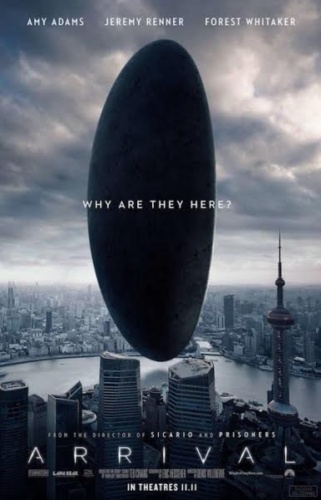 If aliens landed on earth, all things considered they’d probably be a lot like the ‘creatures’ that hover above the 12 randomly selected geographical locations in this high concept sci-fi flick directed by Denis Villeneuve. Probably. Adapted from a short story by respected author Ted Chiang, it doesn’t just thrust little green men at you, instead it paws over their fundamental drives and differences from a philosophical and existential perspective. Oscar-nominated Amy Adams stars as Louise Banks a language expert called in by the military to decode the unusual rumblings that the aliens use to communicate. She soon becomes central to our understanding of their mission on this planet.

It has a patient build that will have you gripping your seat waiting for that moment when our ‘visitors’ go whacko and start lasering everything in sight. You’re waiting for the gung-ho military leaders from USA, Russia and China to upset the delicate intergalactic apple cart as mass disorder occurs in their own nations, with news anchors reporting 800,000 people are marching on Washington to urge the White House take firmer action. Despite the mayhem this doesn’t happen. And this, sense of never being fed the expected and having a drawn out and suspenseful pace is even more disturbing. The atmospheric, sweeping shots of the monolithic heptapods they arrive in are a clue to this unease. It’s the unspoken power of a force that could bounce our planet around like a basketball if they so chose.

Language and communication are the key themes in this movie, implying that perhaps our own political leaders don’t do enough of it. The 12 heptapods each contain some vital piece of information for humanity and the ‘host’ countries just need to decipher the alien’s language to get at it. But obviously it’s not as easy as that. For one, they communicate using smoke signals similar to those supposedly used by Native Americans, but in this case emerging from tentacle-like digits. Secondly, the host nations need to share the gathered info to make sense of the total message but international cooperation is low on the agenda when these military rivals always eye each other with suspicion, let alone the aliens. In many ways it seems a not so subtle Game is being played by these beings of higher intelligence.

Throughout, there is a sense, not just of the approaching grand revelation we’ve grown accustomed to in the genre, but also a spiritual awakening of sorts. Director Denis Villeneuve is asking you to think and feel your way through the deliberately slow-moving narrative, almost as it were real life, for he offers no easy answers and no cliched Hollywood way out. No explosions or poised nuclear weapons, just 12 hovering alien space craft doing nothing yet transforming absolutely everything and everyone by their unexplained stillness.

There’s a twist in the plot involving Louise Banks and the Chinese army’s chief of staff that’s hard to understand. That is, you’ll grasp it but it seems full of holes. Also you’ll not expect the film to end where it does and if on preview night one can hear a couple whispering “Er.. we’re going to have to watch this again, dear.” that’s not necessarily a bad thing. It shows the script has traction and depth and will bring the punters back in (because they’ll be too cool to admit to their mates they didn’t get it). Having travelled so far on a plot that works so well by being both powerful and sensitive who wants to be left scratching their heads as the credits roll? Very few. And that’s exactly why we need more films like this.