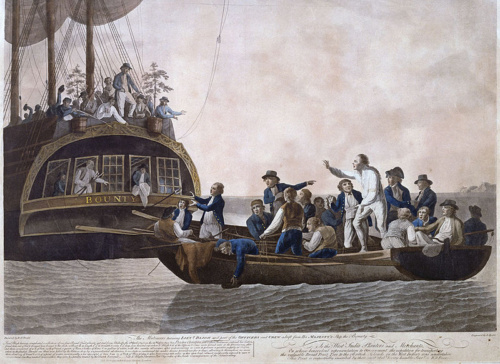 Strangely enough, many people still believe Captain Bligh and Fletcher Christian to be fictional characters because of the romantic and swashbuckling nature of their exploits on the High Seas and the escape to the idyllic islands of Tahiti. It’s a tale amazing enough to grace any worthy book of literature and, indeed, movie of which there were many. But they are 100% real historical figures and Captain Bligh’s former home at 100 Lambeth Road, South London exists today as proof.

When he set sail on the majestic three-masted HMS Bounty to gather breadfruit in Tahiti and ship them to the British Colonies in the West Indies he never envisioned the mutiny by his disgruntled crew which followed, leaving him set adrift in a small boat and close to death. This being the age of Britain’s Empire and naval dominance, the sourcing of cheap food supplies for a growing community of slaves in the Caribbean was a task crucial to an economy that benefited from forced labour.

The trouble was tropical Tahiti: it’s bountiful food and beautiful women proved too difficult to leave. Given the choice between three weeks on the empty ocean with the increasingly cruel and overbearing Bligh on the return back to England or life in a comparable paradise, they chose the latter and Bligh paid dearly. Acting Lieutenant Fletcher Christian led the mutineers and abandoned his superior officer on a small boat with fifteen loyalists. Twenty five stayed behind.

Cast away for 3,500 miles with just five days worth of food and water, a nautical map and a compass, Bligh reached England and was promoted to captain despite the loss of his ship. The frigate the HMS Pandora was despatched to bring home the mutineers. This they achieved, but they never caught Christian.

Bligh’s Georgian house now stands opposite the Imperial War Museum and has been made into a guesthouse which boasts ‘flooring with a quirky “ship at sea” feeling.’ Also, one of the rooms available is called The Crows Nest!