And Michael Jackson Lives On 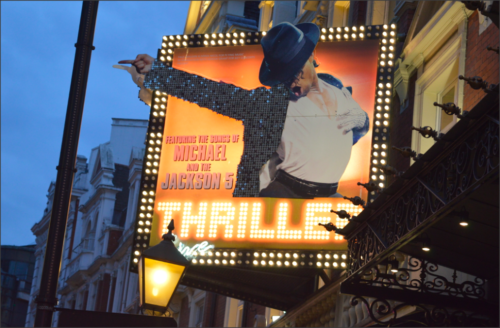 Michael Jackson’s birthday was only a few days ago on August 29th and naturally would have prompted a sense of nostalgia amongst his devoted fans. The London-based ones would have headed in droves to his Thriller Live Show at the Lyric Theatre, Shaftesbury Avenue for a performance and atmosphere that would make up for the great man not there in concert himself. Well few would have been disappointed with the dazzling renditions of his greatest hits, from Jackson Five tracks such as I Want You Back right up to solo classics such as Beat It.

Running  at the Lyric since 2 January 2009, this two and a half hour gig is the brainchild of Jackson family friend and author Adrian Grant. An unabashed Jackson admirer, he set up a British fan club way back in 1988 and has been pushing the family name on these shores ever since in every way. Jackson never had creative input or executive involvement in Thriller Live but gave the production his blessing.

Such was the breadth of Jackson’s incredible talent that they needed a number of singers and dancers to match his genius in each area. Faultless singers male and female who reproduced his highest pitch tones in their own style but with a Jackson flavour. A non-singing totally separate dancer was drafted in to reproduce his trickiest trademark moves – moonwalks, spins and the full gamut of thrusts and hand jives.

The eye-catching set design and stage lighting created a fitting backdrop to the glittering, sequinned aura we associate him with. Much of this atmosphere can also be attributed to the stage dancers whose seamlessly choreographed moves generated an energy that carried through to the hand-clapping audience even as they were being encouraged to get to their feet by the performers.

All his most memorable hits were there and you were kept waiting right to the end for the greatest chart topper of all – Thriller. Zombies emerged from the darkness and crept up on unsuspecting audience members, pale, eyes bulging and looking like they had seen Death itself. And that’s just the audience members we’re describing here!