An Interview with Sculptor Michael Sandle: Now and Then 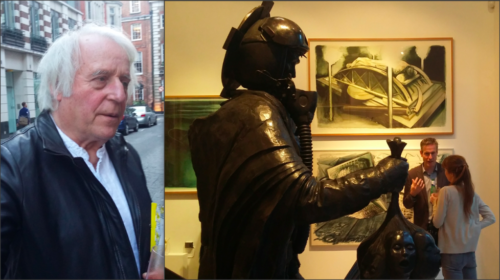 Describing himself as a radical traditionalist, (a label pinned on him by art historian Marco Livingstone) world renowned British sculptor Michael Sandle pulls no punches in this interview with What’s Hot London?’s Eddie Saint-Jean. He doesn’t hide his distaste for contemporary art and claims that many of today’s artists cannot draw and show no interest in developing basic skills. Despite the fact he was born with such skills he points out he has devoted his life to further developing and honing his natural ability.

“’The whole point about drawing is you have to be able to see shape, if you see shape you can draw. You’ll be amazed how many people have been to art school and are doing degree courses but can’t draw for toffee because they can’t see shape and nobody’s taught them to because their teachers can’t draw!” The inference being that everything becomes a bit self-perpetuating. And talking of self perpetuating, Daily Mail journalist John Humphrys once commented that Sandle no longer teaches his students to draw because of fears it may harm their career prospects. A statement that perhaps highlights the paradoxical confines of post-modern art.

“A blizzard of shite masquerading as art.” is his curt summation when pressed further about these views at his Then and Now exhibition at Dadiani Fine Art, Mayfair. However, he is much more expressive when sharing how the technical skills lacking in these young pretenders are applied in his own work. Indeed, they are central to the proportion, power and apocalyptic gesture of his centrepiece sculpture ‘As Ye Sow So Shall Ye Reap: An Allegory, a formidable bronze statue of Jesus dressed in bomber pilot gear and claiming the ‘scalps’ of five severed children’s heads.

Based as it is on a Holman Hunt painting in St Paul’s Cathedral called The Light of The World, it is intended as a statement against hypocrisy because according to him while Isis behead people with daggers the West does so with bomber pilots such as these. He maintains that it isn’t an attack on either Jesus or Holman Hunt (whom he admires ) but on the double standards of international conflict. Themes of war and destruction always dominant in his work.

The upheaval and wreckage which goes hand in hand with the might of our democratic-capitalist military era is perhaps a personal bane and his call-to-mission in producing such work. An exacting way to mark his opposition. Today the technological means of destruction are at a level unmatched in history while, paradoxically, democracy and human rights are more widely embraced than at any other recordable age in the timeline of human existence. Here he also finds parallels with the declining Roman empire, once a cultural and military giant now identifiable only by ruins in tourist spots. A self-destroying decadence he believes now threatens the existence of the West.