An Interview with Novelist Nuril Basri 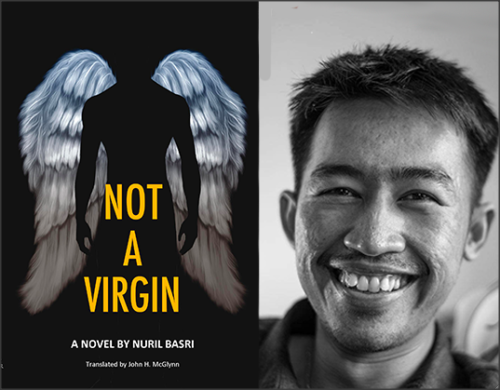 Not A Virgin is a new novel by Indonesian writer Nuril Basri, which delves into the world of the transgender and transexual community in his home country and shares the coded language they use to communicate. What’s Hot London? magazine talks to him about his creative journey to completion.

Not A Virgin is a pretty intense personal journey as experienced by the main character. What inspired you to write it and how long did it take?

Not A Virgin is accumulation of things that I have known or heard of. The inspiration came from many forms including people and incidents that I encountered. I didn’t have the intention to make the book came out that way. My initial thought was I want to deliver a story which I think might be interesting for people to discover, because they’ve never read something like that before. “If there’s a book that you want to read, but it hasn’t been written yet, then you must write it,” – this quote by Toni Morrisson encouraged me.

The storyline just happened during the writing process. Even though I have always known what I wanted to write, the details and content just grew. It took three months to write the first draft, and six months for the second. Those were very challenging times because I was staying at a pesantren (Islamic boarding school) learning the Quran and had to steal time to complete it.

Does the lead character have any experiences or characteristics taken from you?

I came from a small village then moved to the outskirts of a big city, and as I mentioned before, I stayed at a pesantren for quite sometime. For a period of my life I was working as an internet cafe manager and the building next to the internet café was a salon, in which the transsexuals and transgenders who worked there taught me to speak their own specially created language and shared their very fascinating stories. I try not to write about anything that I don’t really know well or have an interest in. I think my whole personal life is a research project. However, the whole plot and characters in the book are fictional. But maybe, I unconsciously must have scattered tiny parts of me in some of the lead characters. Not entirely, of course (they’re not me, ha ha).

To what extent has your cultural background and birthplace of Indonesia inspired or impacted your writing?

Aside from my cultural background or birthplace, I just simply try to write things that at some point steal my affinity. My last work Epifania (published in Malaysia under SUNYI, 2017) was something completely different from Not A Virgin. While this latest book is a tragicomedy-coming-of-age novel, Epifania is a pre-apocalyptic adventure. It’s a story about a narcoleptic guy who tries to go home to see his family at a chaotic time just before the apocalypse. I feel it’s necessary to avoid repeating the same themes over a short period. However, I don’t know how my background influenced my writing. I can’t explain that, but I’m quite sure that’s a mystery. Writing itself is a mysterious process for me.

Was your book well received in Indonesia? What was the public reaction to your literary insights?

The public reaction toward my literary insight has never been a main concern for me, especially during my creative process. Writing was purely my ‘me time’. It’s liberating. I always set aside the public’s reactions. It sure delights me when people appreciate it. If it happens the other way then I say nothing. At least I enjoyed writing it, although I often have doubts and ask myself “is this good enough?”

Not A Virgin was first published in Malaysia (and translated into the Malaysian language) by Buku Fixi in 2012. By 2017 the novel still had not been published in my own country, Indonesia. Quite ironic really. It got translated into English, and both the Indonesian (Bukan Perjaka) and English edition are sold very exclusively by Lontar Foundation in Jakarta. It’s been reprinted six times in Malaysia, and although it’s not sold in the major bookstores, Indonesian readers enjoyed them, at least from what I’ve heard. Ha ha! And the book got me to London!

You came to London on a residency last year to promote your book. Will you be returning any time soon?

The residency was probably the best thing that happened to me, thanks to the Indonesian National Book Committee who made it came true. Not only did I get the opportunity to promote my book, I also made the acquaintance of many incredible people in London, Norwich and Torquay. So  coming back to London is on my wish list, hopefully during the London Book Fair this year, if not then the next one. Or… when I find a publisher in London. I’m also looking for a literary agent.

For the time being the book can only be purchased through www.lontar.org as I haven’t given Amazon the rights yet. There are three chapters of the novel which can be read in queersoutheastasia.com which includes both Indonesian and English editions (translated by John Mc Glynn).