All Eyez on Me (Film) 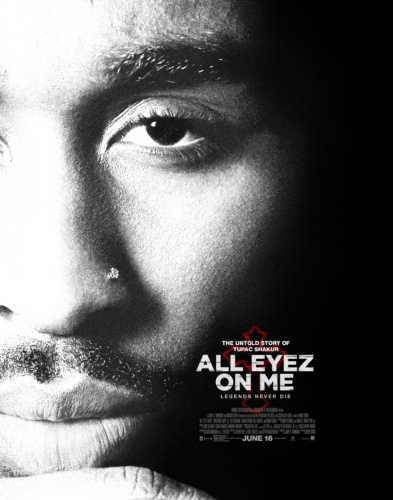 Review of: All Eyez on Me (Film)

This much-awaited biopic about hip-hop legend Tupac Shakur had already drawn criticism from current rap king 50 Cent within hours of its release. As with all matters where there’s such high expectancy it can be difficult to please all the Tupac fans.

It’s a big ask, trying to capture the dramatic rise to fame, controversy, politics, jail time and feuds into a couple of hours and director Benny Boom cannot be accused of cutting corners although, inevitably there will be areas deemed lightweight by observers seeking enlightenment and closure about those involved in his 1994 Quad Studio shooting and his 1996 Las Vegas murder after the Tyson fight.

Lookalike actor Demetrius Shipp Jnr exudes the charisma and talent to fit that trademark pirate bandana quite effectively, despite this being his first film. Danai Gurira is a believable and stirring Afeni Shakur who brings up her son in a household steeped in Black Panther militancy and political awareness but is later revealed to be a crack addict.

His early ties with New York are both eye opening and tragic considering the East Coast-West Coast feud that festered in nineties hip-hop. He was born there but would move to Baltimore where he met Jada Pinkett at the Baltimore School for Performing Arts, a friendship that continued when both blossomed as stars in their different fields. She returns as his moral conscience at testing times in his life, notably when the feud reaches boiling point with the release of the vicious battle record Hit ‘Em Up where Tupac claims he slept with Biggie’s wife Faith Evans.

The Biggie and Suge Knight characters perhaps do not have the power and menace the hip-hop community has come to recognize them by. You expect Biggie to loom large, literally and metaphorically, and ditto Knight, owner of Death Row records. Suge feels more empowered in his gang-affiliated red-colours only as the film progresses and his empire expands. So perhaps that feature was subtly intentional.

Tupac fans will love the party-bangers and other recognisable hits as he takes the stage. Right from the slapstick Digital Underground tracks through to the more conscious Keep Your Head Up and later the vicious and uncompromising Hit ‘Em Up. Director Benny Boom has these fans firmly in his 35mm camera sights, in this respect, but will inevitably get accused of pandering to them a little too much in committing to covering as many areas of his life as possible. It’s a strategy that does justice to the Tupac legacy but little of this justice permeates the twenty-year mystery of a murder that remains unsolved.